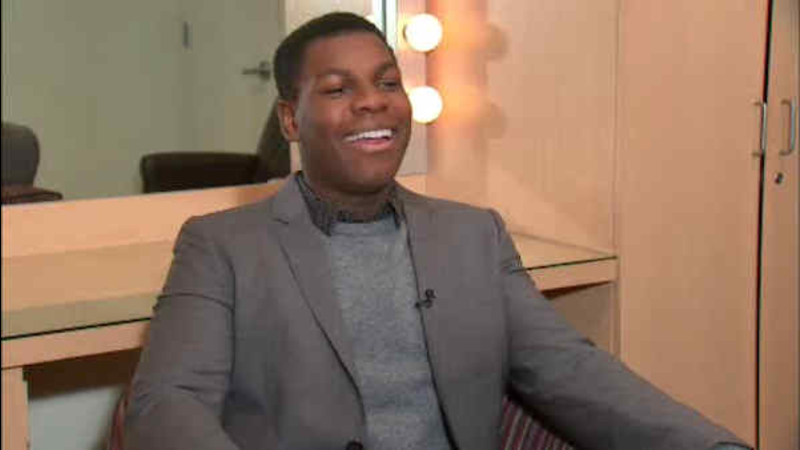 NEW YORK (WABC) -- "Star Wars: The Force Awakens" is officially hitting theaters across the United States, and as one of the most highly-anticipated films in history, there is bound to be a breakout star or two.

The cast is a mix of the old and the new, and one to keep an eye on for the future is 23-year-old John Boyega. The son of Nigerian parents, he discovered acting while at school in London when he was just 9 years old.

"I just wanted to do more," he said. "That was the only thing that was going through my head. I was in a school play, and it worked out and everybody was entertained. And I loved the feeling that I got."

The future star was recruited by a coach at a theater for gifted kids, and he started working professionally while still a teenager. And that led to a galaxy far, far away.

"Going up for the part, first off, first audition, we had no clue the gravity of these roles and how much Finn would play in this movie," he said.

His character is a lowly stormtrooper fighting for a dark force called the First Order, before he becomes disillusioned and starts helping the resistance.

Daisy Ridley and Boyega represent nothing less than the future of the Star Wars franchise, so it's no surprise they had to audition for seven months before getting the news they'd won out over so many other young actors. The process was so long that by the time he got to the huge set, he was comfortable.

And not even playing opposite Harrison Ford's Han Solo could rattle him.

Much as the original "Star Wars" catapulted Ford, Carrie Fisher and Mark Hamill to worldwide fame, so it is now for Ridley and Boyega.