Stenography students in Queens battle for title of fastest fingers 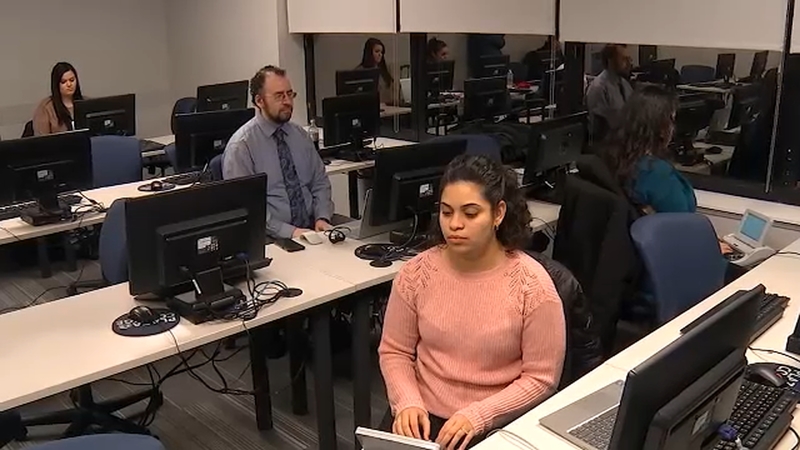 Stenography students in Queens battle for title of fastest fingers

With the rise of technology these days, some might call stenography a dying art, but stenographers say that's just not true.

More than 100 students studying at Plaza College to become broadcast captioners and court reporters participated in the contest.

It's not as easy as it might look. Student Samantha Cipriano said there is a lot the brain has to compute in a short amount of time and it involves a lot of muscle memory.

"It's a whole different language, there's 23 keys on the machine and each letter means something else," Professor Joe Charles said. "Could mean a group of words, could mean a phrase -- so you're learning a skill, you're learning speed and another language."

In order to graduate, the students must hear five minutes of dictation and transcribe 225 words a minute with a minimum 96 percent accuracy.

The best wins the national contest.

"It's a trippy experience doing this for sure. I think when I got involved, I didn't know how intense it was going to be," Cipriano said.

And not only is stenography not a dying art, some say the profession is going through a renaissance.

About a decade ago, stenographers were being pushed out and there was a lack of new blood coming in.

"When they put the tape recorders into the courtrooms, there was a lot of inaudibles," Santucci said. "So trials had to be thrown out or they had to retry cases."

Now there's a shortage of talent, and demand is higher than ever.

"We've always been known as the guardians of the record," Santucci said. "And now everybody thinks Alexa and Siri can take over -- but they can never take over from the human."