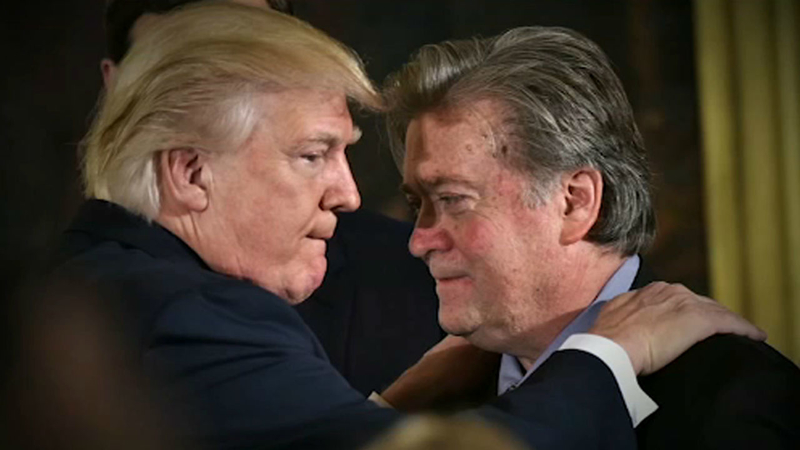 Bannon was among four people charged with bilking donors of the "We Build the Wall" crowdfunding campaign out of hundreds of thousands of dollars.

He was arrested Thursday morning on a boat in the Long Island Sound off the coast of Connecticut.

He was taken into custody by US Postal Inspection Service and investigators with the Southern District of New York on allegations that he and others made false representations about the campaign.

Bannon had been living on the Lady May., a $28 million yacht owned by a Chinese billionaire.

The ex-Trump advisor wore a white mask, light colored striped button down open at the collar and looked quite tan, to the point of sunburnt, on his face as appeared from the courthouse cell block before Magistrate Judge Stuart Aaron.

Prosecutors and defense attorneys agreed that Bannon should be released on a $5 million bond secured by $1.75 million in cash and two co-signers.

His travel will be restricted to the New York and DC area. Notably he cannot use private jets or yachts without permission of the judge.

Authorities say Bannon, Brian Kolfage, Andrew Badolato and Timothy Shea falsely assured donors that the organizers were not taking a penny of donation money, but Bannon himself is alleged to have taken at least $1 million to pay for personal expenses.

"As alleged, the defendants defrauded hundreds of thousands of donors, capitalizing on their interest in funding a border wall to raise millions of dollars, under the false pretense that all of that money would be spent on construction," acting U.S. Attorney Audrey Strauss said. "While repeatedly assuring donors that Brian Kolfage, the founder and public face of We Build the Wall, would not be paid a cent, the defendants secretly schemed to pass hundreds of thousands of dollars to Kolfage, which he used to fund his lavish lifestyle. We thank the USPIS for their partnership in investigating this case, and we remain dedicated to rooting out and prosecuting fraud wherever we find it."

Starting in approximately December 2018, the four defendants orchestrated a scheme to defraud hundreds of thousands of donors, including donors in the Southern District of New York, in connection with an online crowdfunding campaign ultimately known as "We Build The Wall" that raised more than $25 million to build a wall along the southern border of the United States.

In particular, to induce donors to donate to the campaign, Kolfage repeatedly and falsely assured the public that he would "not take a penny in salary or compensation" and that "100% of the funds raised...will be used in the execution of our mission and purpose" because, as Bannon publicly stated, "We're a volunteer organization."

Instead, the indictment alleges, the four men received hundreds of thousands of dollars in donor funds from We Build the Wall, which they each used in a manner inconsistent with the organization's public representations.

"The defendants allegedly engaged in fraud when they misrepresented the true use of donated funds," Inspector-in-Charge Philip Bartlett said. "As alleged, not only did they lie to donors, they schemed to hide their misappropriation of funds by creating sham invoices and accounts to launder donations and cover up their crimes, showing no regard for the law or the truth. This case should serve as a warning to other fraudsters that no one is above the law, not even a disabled war veteran or a millionaire political strategist."

In particular, Kolfage covertly took for his personal use more than $350,000 in funds that donors had given to We Build the Wall, while Bannon, through a non-profit organization under his control, received over $1 million from We Build the Wall, at least some of which he used to cover hundreds of thousands of dollars in personal expenses. .

They did so by using fake invoices and sham vendor arrangements, among other ways, to ensure, as Kolfage noted in a text message to Badolato, that his pay arrangement remained "confidential" and kept on a "need to know" basis.