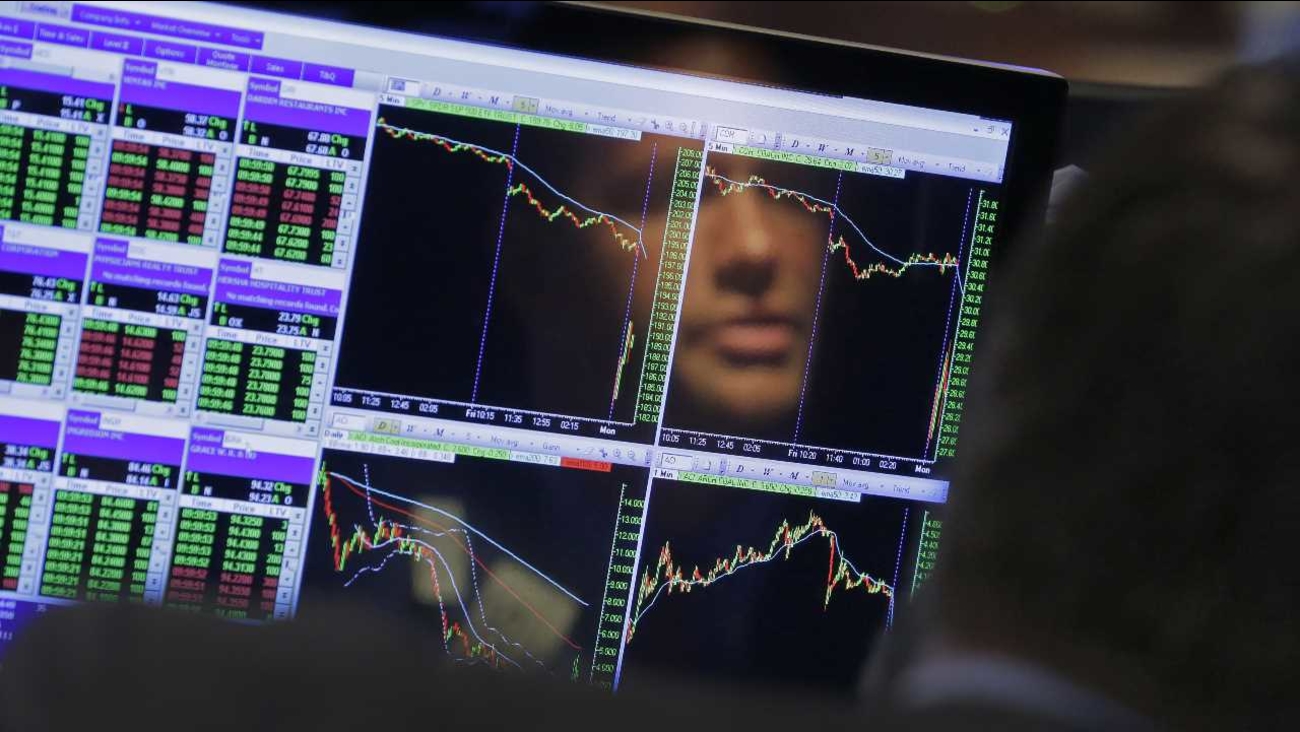 Specialist Frank Masiello is reflected in his screen on the floor of the New York Stock Exchange, Monday, Aug. 24, 2015. (AP Photo/Richard Drew)

WASHINGTON -- Even as anxious investors send stock prices plunging, many Americans are sounding a rather different note:

They're staying calm and carrying on.

Some wonder if they may have to work a few extra years to recoup some of their shrunken retirement savings. Others concede that the meltdown might have wiped out investments needed to pay for a vacation.

Yet conversations Monday with roughly a dozen everyday Americans suggest that people generally expect stock prices to rebound, just as they have after previous swoons. For now, the panic on Wall Street does not appear to have spread very far.

"I'm certainly not panicking or looking for tall buildings," said Vincent Signorotti, 62, a San Diego-based executive for a company that builds geothermal plants in Southern California.

Signorotti said he has no plans to cut back on his spending or even adjust his investment strategy.

Carolyn Gaver, a 67-year-old from Clifton, New Jersey, said she plans to phone her broker to check on her portfolio. But she said her investments are more conservative now, since she's older, "so hopefully it's not too bad."

The biggest impact will be on how long she continues to work as a paralegal.

"Do I work another year? Another two years, if I can?" she said. "Do I just have faith? In the past, (the market has) come back and balanced pretty well. I have to hope for that."

In St. Louis, Shannon Miller refused to check her 401(k) plan Monday, just to stop herself from having a knee-jerk reaction to the stock plunge.

"I did, however, lose a few hundred of my 'Monopoly money' trying to play the stocks short-term for say, vacation or a roof repair," said Miller, a digital content manager. "But I'm 27 and have a while to right the ship."

John Cosgrove, 30, of Raleigh, North Carolina, said he moved his 401(k) savings to cash in July, anticipating the possibility that he might be buying a house.

"I moved it to cash knowing that that value will stay the same so that I can continue on my house hunt," said Cosgrove, a software application engineer. "I'm glad I'm on the sideline now."

Cosgrove said his shopping routine and other daily spending decisions won't be affected by the stock market. He said he still has room to budget.

Instead of reaching for antacid, Frank Bowles, a 71-year-old Missouri retiree, plans to maintain his investment portfolio and even seek bargain-priced stocks.

"My broker has called me a couple of times (in recent days) and sent me a big old email about what not to do, like not to be fearful," said Bowles, who formerly owned a company that specialized in invoices and other business forms. "I kind of already knew that."

"If it goes down too far, we'll just buy something" that becomes alluringly discounted, he said.

Others said they were grateful for the sell-off because it might delay plans by the Federal Reserve to raise interest rates.

The Fed has kept its benchmark short-term rate at a record low near zero since late 2008. But before the recent stock market downturn, solid job growth had led Chair Janet Yellen to say the Fed would likely raise that rate later this year, potentially as early as September. A Fed rate hike could lead eventually to higher U.S. Treasury yields and mortgage rates.

For homeowners with adjustable-rate mortgages, such as Conal Crawley, the stock market decline was welcome news that the Fed would put off a rate hike and that his home loans would remain manageable.

"I'm just trying to get the low rates," said Crawley, 49, who lives in Boston.