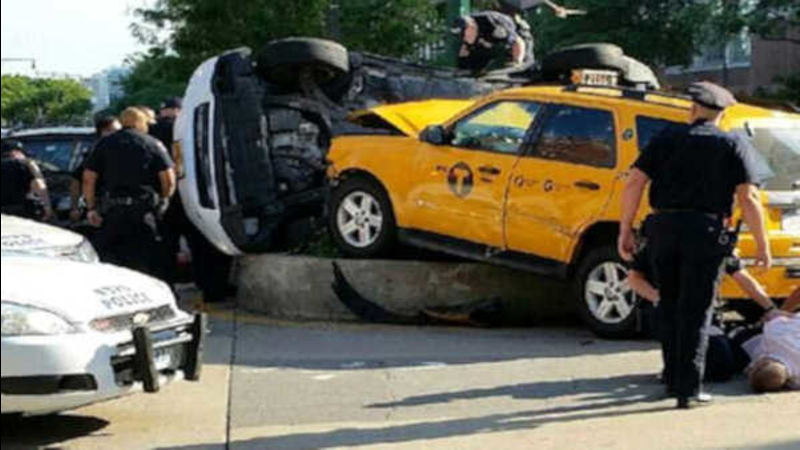 LOWER EAST SIDE, Manhattan (WABC) -- It was a wild crash that could have been so much worse. Police say it all started on the Lower East Side, when the suspect sped off in a stolen taxi. The crash then ended near Battery Park City.

"It was pretty loud - you could've heard it three, four blocks away. It was very loud. It startled me," says eyewitness Karlin Chan.

Police say the man speeding across Lower Manhattan in the stolen cab slammed into a white Lexus SUV at Chambers and West Streets, tossing that SUV on top of the median, nearly flipping it over. The collision was so violent, it could have been deadly. Thankfully, no one was killed.

Police say at 7:45 Sunday morning, the suspect hailed the cab at Grand and Allen Streets. Moments later, at Essex Street, the suspect told the driver the cab had a flat tire. The driver then exited his cab to check his tire, and that's when investigators say the suspect jumped behind the wheel and took off.

The suspect was arrested at the crash site. The driver and a passenger in the Lexus were injured, as well as the suspect. All three are hospitalized, but are expected to be okay.

The suspect's wild joy ride lasted for about 40 minutes.

Police are still left with unanswered questions during the investigation - what was the suspect doing with a stolen cab, and did he pick up any fares?