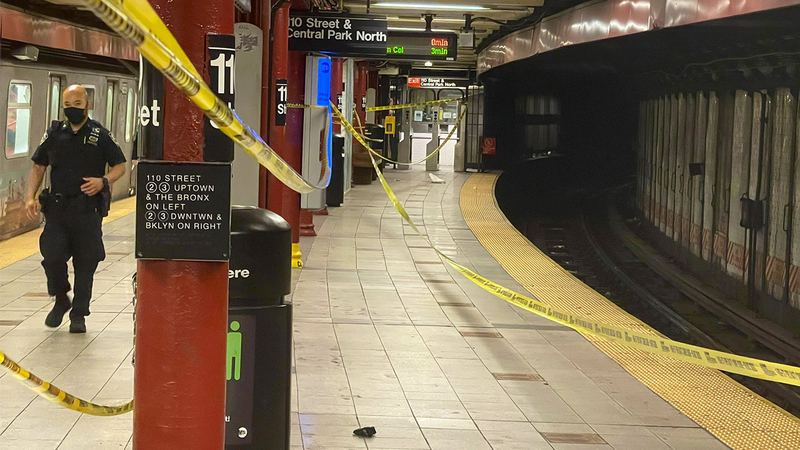 HARLEM, New York (WABC) -- An investigation is underway after two men were slashed by a suspect with a dog inside a subway station in Harlem.

A police source tells Eyewitness News, the suspect entered the subway at 110th Street with a dog.

They say for some reason, the suspect leaves the dog outside while he swipes in, then goes to retrieve the dog and then gets locked out.

The man then asks a passerby to let him back in, but the person says no. However, a second passerby lets him in.

According to the source, the suspect then goes after the first person who refused to help him and slashes him in the arm.

They say the suspect was swinging the knife so wildly that he then slashes the second man who helped him enter the subway.

The source tells Eyewitness News that the suspect then dropped the knife, grabbed the dog and ran.

Video from Citizen App shows a man, his arm bloodied, waiting for medical attention moments after the slashing.

As a result, 2/3 trains were bypassing Central Park North and 110th Street in both directions.

Update: 2/3 trains are bypassing Central Park North (110 St) in both directions because of NYPD activity at that station.
Here's a guide to nearby services: https://t.co/agAxmgr68o pic.twitter.com/uusM4WUNqB

The victims were taken to St. Luke's in stable condition.

Officials say the suspect fled in an unknown direction. He is described as wearing all black.

This comes amidst a shocking rise in crime in New York City's subway stations.

According to the latest transit statistics, there have been 168 reported subway crimes in May 2021, compared to 81 reported crimes the same month last year. That's a 93.1% increase.