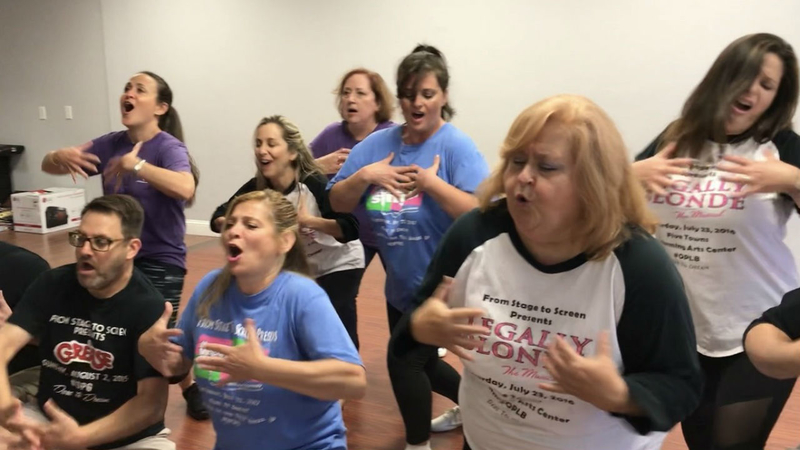 COMMACK, Long Island (WABC) -- What began three years ago as a challenge to parents of students at a performing arts academy on Long Island to put on their own show has evolved into a legitimate musical theater group.

Eyewitness News met up Tuesday with the 16-member cast as they rehearsed for their show this Saturday, All Shook Up - An Elvis-Inspired Musical. The group of parents and working professionals, who call themselves OPs or Old People, has been practicing virtually around the clock since May.

"We have someone who works in Manhattan all day and then comes straight here from the train," said cast member Amy Schombs. "We're here all night and we have backaches and we're all popping Advils."

The group first got together in 2015 when a student at From Stage to Screen Performing Arts Academy in Huntington decided he wanted to direct a group of parents of students in a full-blown performance of Grease.

"We all came out and auditioned. We were nervous wrecks," Schombs said.

Since then, the group has performed Legally Blonde and Wedding Singer. Many members of the cast have previous musical theater or acting experience from childhood, high school or college, while others have never been on stage.

The producer of the Elvis show and owner of From Stage to Screen, Gene Forman, said don't be fooled -- the group puts on a great show.

"When they hit that stage, it's the Super Bowl for them. They don't think it's funny. They're in it," he said.

Matty Levenberg, a 17-year-old student at the academy, is the director of the show. His older brother is the one who had the original idea for the parent performing group.
Levenberg said he couldn't ask for a better group of people to direct.

"They always come ready and prepared with full energy. Whatever I tell them to try they try it right away," he said.

Arlene Kyler of Oceanside is the oldest member of the cast at 74 years old. Her daughter, who is also in the group, convinced her to join knowing her mother had done some musical theater when she was younger.

The group will perform this Saturday July 21 at 8 p.m. at the Suffolk Y JCC in Commack.