Coach bus goes out of control on I-78 after hitting black ice in Summit, NJ 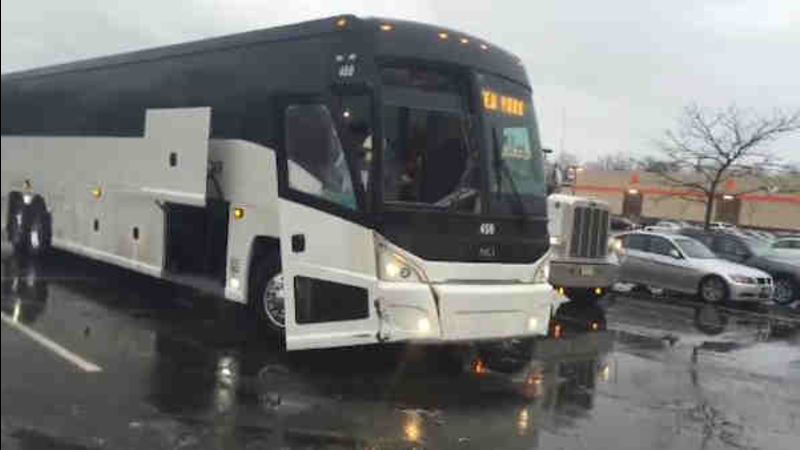 SUMMIT, New Jersey (WABC) -- Black ice caused the driver of a bus to lose control of the vehicle on Interstate 78 Tuesday morning.

The Coach bus crashed in the eastbound lanes at mile marker 48 in Summit, N.J., just before 5:45 a.m.

Passengers stepped off the damaged bus all saying the same thing: It could have been worse.

But they credit their driver, who never lost her cool, even as the bus seemed to be out of control. "Little bit of training, little bit of instinct, little bit of I did what I had to do," said the driver.

But on eastbound I-78, the bus hit a patch of black ice and crashed into a car and then a guardrail.

All express lanes between Exits 48 and 49 were closed.

"If I had my skates, I'd play hockey on it," said John Micheller, who crashed his pickup truck trying to avoid another wreck. "And I did two 360's in the middle of the accident and ended up against the guardrail," he said.

Seven vehicles were involved in the three collisions, including the bus wreck, that occurred shortly after 5 a.m. on the wet roads of the highway, said State Police Sgt. First Class Gregory Williams. A total of eight people were injured.

None of the injuries was life-threatening, Williams said. He said the roadway was nearly cleared of all the vehicles shortly after 7 a.m.

Salt trucks had a difficult time getting to the crash site because of the ice.

On the bus, passengers sat patiently while also pondering just how fortunate they are that the bus stayed upright and mostly intact.

Other buses were brought in to get the passengers to their final destination and they say considering all they've been through, they're just grateful they can walk from one bus to another.
Related topics:
trafficsummitnew jersey newstrafficaccident
Copyright © 2022 WABC-TV. All Rights Reserved.
TOP STORIES
Rallies held in NYC after Supreme Court overturns Roe v Wade
Deadly mass shooting outside Norway gay bar investigated as terrorism
Supreme Court overturns Roe in landmark case on abortion rights
Brian Laundrie's notebook revealed: 'I ended her life'
3 people found dead inside Queens home
Companies willing to cover travel costs for those getting an abortion
NYC Pride weekend celebration turns into rally cry
Show More
Tri-State reacts to Supreme Court overturning Roe v. Wade
What does Supreme Court abortion ruling mean for NY, NJ, and CT
Police find suspicious device with chemicals, BB pellets at LI school
Congress sends landmark gun violence compromise to Biden
Biden vows to 'do all in my power' to protect abortion access
More TOP STORIES News