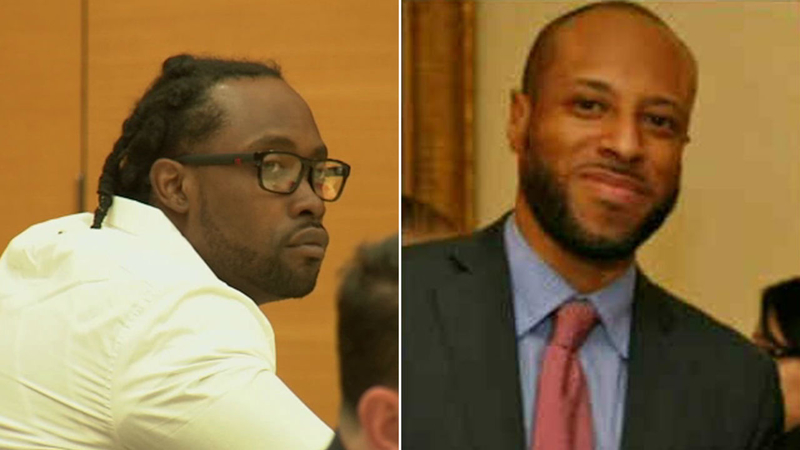 NEW YORK (WABC) -- One suspect accused in the fatal shooting of Carey Gabay, a former aide to Governor Andrew Cuomo, has been found guilty of manslaughter, but was acquitted of murder charges.

The verdict for Kenny Bazile, 32, was reached Thursday afternoon. He was also found guilty of criminal possession of a weapon.

Prosecutors said multiple suspects began shooting at rival gang members during the J'Ouvert Festival celebration in Brooklyn in 2015, hitting Gabay in the head with a stray bullet. He died in the hospital nine days later.

"Carey was an inspiring public servant whose life was cut short by senseless gun violence. I commend the men and women of law enforcement for their relentless pursuit of justice and thank the prosecutors for their work in honoring Carey's legacy." Cuomo said. "Nothing can bring Carey back to his wife Trenelle, his family and all those who loved him, but I hope this guilty verdict gives them some comfort that justice has been served. Carey will be forever missed."

The cases are being heard by two juries, with Bazile as a solo defendant and then three others as co-defendants -- Stanley Elianor, Keith Luncheon and Micah Alleyne.

The lawyer says this was not a gang war, but retaliation after one gang member was beat up by a rival gang.

Prosecutors said there were seven different semi-automatic weapons used in the shootout, though they never pinpointed exactly which gunman struck the 43-year-old.

They say Bazile was not an innocent bystander who was a victim of a surprise attack, but that he knew exactly what was unfolding and was a gang member protecting his home turf who moved toward the gunfire, not away. They say he chose to join the gang war and knew there were hundreds of people walking in the street at the time. With each pull of the trigger, they say he was putting their lives at risk -- a risk he was willing to take.

"This defendant took part in a shooting war amid hundreds of revelers, cutting short the life of Carey Gabay and putting many others in danger. With today's verdict, he has been held accountable. We will not allow gang members to take over our streets and those who attempt to should expect to be vigorously prosecuted," Brooklyn District Attorney Eric Gonzalez said in a statement.

Bazile now faces up to 15 years in prison but could have been sentenced to life in prison if he was found guilty of murder.