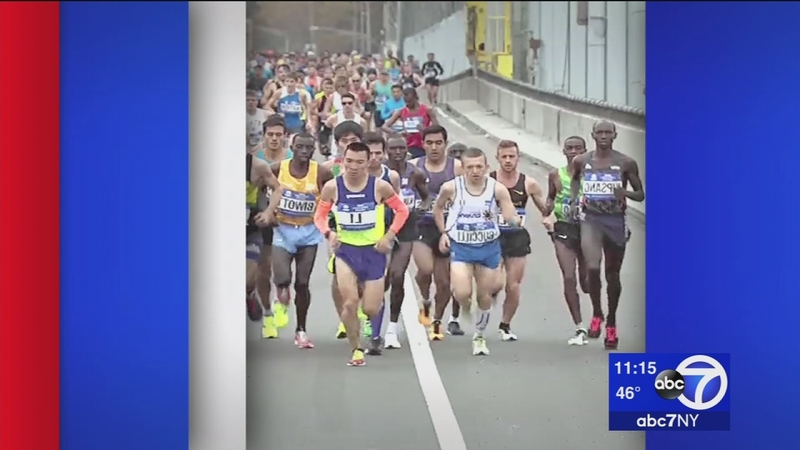 More than 50,000 runners from across the world participate in TCS NYC Marathon

Ghebreslassie finished his debut in New York with an unofficial time of 2 hours, 7 minutes, 51 seconds.

For most of the course, the men's field was a three-man race between Ghebreslassie, Kenya's Lucas Rotich and Ethiopia's Lelisa Desisa. By mile 20, Ghebreslassie gradually began pulling away.

Defending champion Stanley Biwott withdrew at the 10-mile mark with a right calf injury. He also dropped out in the Rio Olympics after getting sick. 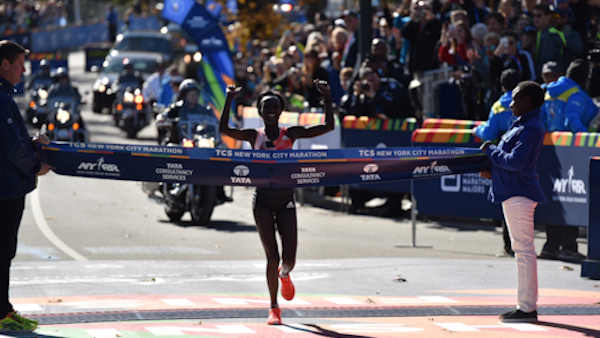 Last year, Keitany pulled away around the 21-mile mark. On Sunday, she began getting a sizable lead at the 15-mile mark as the race crossed the Queensboro Bridge into Manhattan.

Keitany reached Manhattan in less than 90 minutes. As she began running up First Avenue, television commentators referred to her as "The Boss of New York City," and following the 20-mile mark, Keitany led by more than two minutes.

Molly Huddle placed third in her debut after setting an American record at the 10,000 meters in the Rio Olympics.

The 27-year-old American finished Sunday with an unofficial time of 1 hour, 47 minutes, 43 seconds. She again completed the Grand Slam by winning in London, Boston, Chicago and New York, extending her record streak to 17 straight wins in major marathons.

McFadden, who won six medals at the Rio Paralympics, took the lead for good at the 15-mile mark and comfortably led the rest of the course to win for the fifth time in New York.

Marcel Hug of Switzerland won his second NYC Marathon title in the men's race and his sixth marathon this year. He edged Australia's Kurt Fearnley by a sixth-tenths of a second, repeating their photo finish at last month's Chicago marathon.

Scattered amid the crowded, sweaty runners are eight amateurs in their 60s and 70s - all trailblazers in New York in 1976.

"I ran as if you broke your leg and had a cast, trying to get across the street quickly, hopping-style," says Traum, who has a business Ph.D. and created his own computer app company to help companies maximize resources.

At 75, he'll mount his handcycle Sunday at the start line near the Verrazano-Narrows Bridge in the borough of Staten Island. A knee replacement on his natural leg disqualifies him from actually running; one leg must be intact by the rules of the race.

He lost his limb as a young man when a runaway car crashed into him at a New Jersey gas station.

Traum was a member of New York Road Runners, the club led by Fred Lebow, a Romanian-born New Yorker and avid runner whose energy fueled the early efforts to expand and elevate the marathon to a global level. Even after his death, Lebow symbolizes the race, his statue standing near the Central Park finish line.

For the city's first five-borough run, Lebow, George Hirsch and Percy Sutton, Manhattan's borough president, had persuaded Mayor Abe Beame to ban traffic from the route that spanned the whole city. On the sidelines were tens of thousands of spectators - a far cry from the 2 million or so now cheering on runners.

The three men told the mayor that the crime-ridden, nearly bankrupt New York of the mid-1970s "needed the marathon to lift the city's spirits," Hirsch says.

Rodgers and Shorter's payments were legal but defied a regulation of the sport's governing body, now called USA Track & Field, which classified marathoners as unpaid amateurs. Many struggled financially.

The Boston Marathon is the oldest, launched in 1897.

On the first Sunday in November, when exhausted participants finally finish, some collapsing into the arms of loved ones, many take away new friendships while collecting funds for more than 300 charities.

For all the latest marathon coverage leading up the big weekend, visit abc7NY.com/nycmarathon.