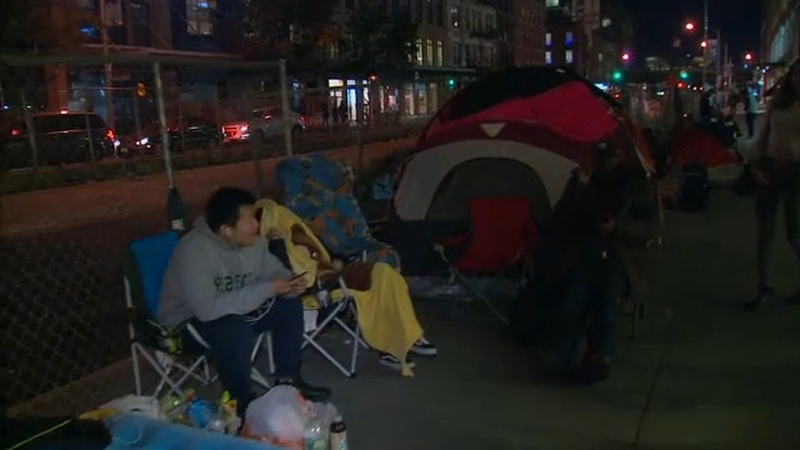 NEW YORK (WABC) -- People camped out overnight at Apple stores around the world, hoping to be among the first to snag the new iPhone X.

Outstide the Apple Store on West 14th Street in Chelsea, tech lovers set up tents, air mattresses, and chairs as they waited until Friday morning's launch.

The iPhone X is Apple's most expensive smartphone ever.

"The Super Bowl for Apple is the iPhone X," GBH analyst Daniel Ives said. "That is the potential game changer."

But it also brings a potential stumbling block. While conspiracy theorists might suspect that Apple is artificially reducing supply to generate buzz, analysts say the real reason is that Apple's suppliers so far haven't been able to manufacture the iPhone X quickly enough.

Making the iPhone X is proving to be a challenge because it boasts a color-popping OLED screen, which isn't as readily available as standard LCD displays in other iPhone models. The new iPhone also requires more sophisticated components to power the facial-recognition technology for unlocking the device.

Even with the iPhone X's delayed release, Apple is still struggling to catch up. Apple is now giving delivery times of five to six weeks for those ordering in advance online. Most analysts are predicting Apple won't be able to catch up with demand until early next year.

The company was optimistic.

"As we approach the holiday season, we expect it to be our biggest quarter ever," CEO Tim Cook said on an earnings call with analysts Thursday. He added that the company is increasing its iPhone X production capacity every week.

Eyewitness News managed to get our hands on one early, to find out whether it's worth the hefty price tag.