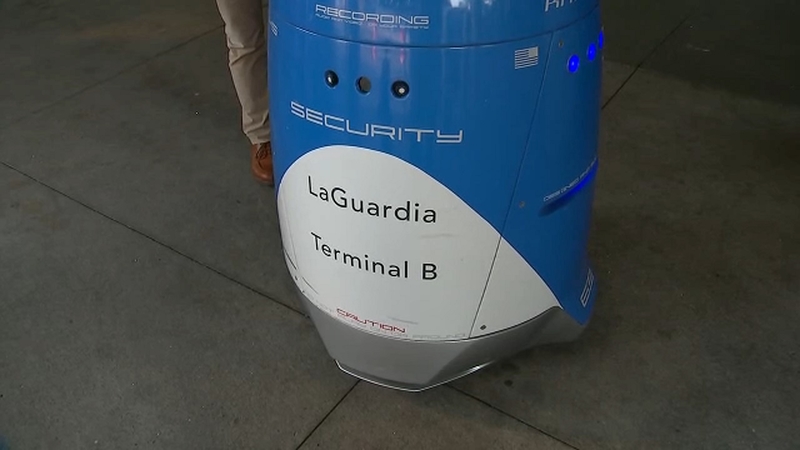 EAST ELMHURST, Queens (WABC) -- During rush hour at LaGuardia Airport it is go, go, go for travelers - it takes a lot to get people to stop in their tracks.

A robot straight out of Star Wars is pacing the arrivals curb at the airport's Terminal B, loaded with cameras and other sensors to enhance security coverage in the congested spot. The security robot - she's a girl by the way, even has a name - 'B-3PO' for Terminal B, where she roams around.

LaGuardia Gateway Partners, the private company that is rebuilding the airport's central terminal, has been using the robot since February. Geofence technology keeps it within a certain area as it glides around, sending images to a central command post.

"I personally haven't seen anything like it," said Tracy Sandford, LGP's director of marketing, who explained the old, decrepit terminal has become an incubator for new ideas as the company builds a brand new terminal, set to open in 2021.

Sandford works for the company that is rebuilding the central terminal, which is using the robot to add eyes and ears to its network of cameras and other sensors in a congested spot outside security.

The security robot travels up and down the arrivals concourse at the terminal. Terminal B is under construction so the whole thing is a trial run so they can test it out as they work on the new building.

"We do have the opportunity to test a lot of different things, use this terminal as an incubator to see what makes sense to bring to the new terminal," adds Sandford.

And the robot is also polite - and quite the curiosity in a place that has never been known to generate smiles.

Carolyn Titcher from West Virginia just had to get a picture.

"I'm gonna show it to everybody when I go home," she said.