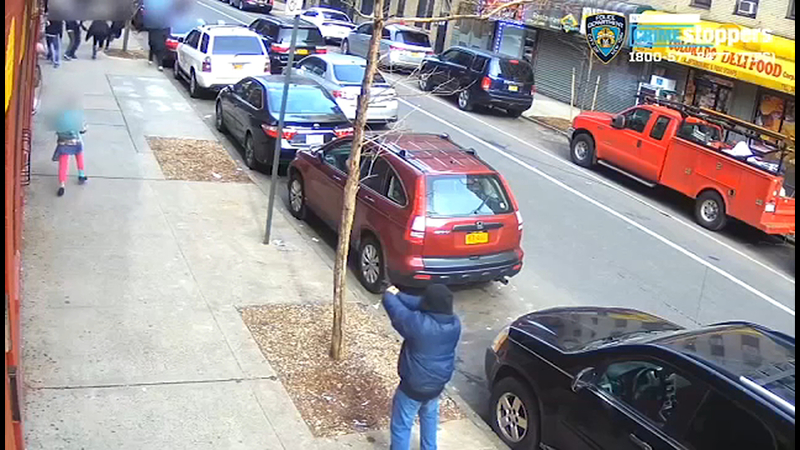 CONCOURSE, Bronx (WABC) -- A teen has been arrested and charged after a suspect was caught on video opening fire in front of children on a busy street in the Bronx.

The incident happened around 2 p.m. on Feb. 22 on Gerard Avenue in the Concourse section.

Police announced Friday that 16-year-old Edgar Garcia was in custody in connection to the shooting. Garcia is being charged as an adult for attempted murder, attempted assault, criminal use of a firearm, criminal possession of a weapon, and reckless endangerment.

Authorities say Garcia walked up to a group of people, pulled a gun and took aim at one of them -- a 19-year-old man. He fired three shots before taking off.

In video released by the NYPD this week, people on the sidewalk can be seen running or ducking for cover.

The NYPD released surveillance video of a man opening fire on a Bronx street.

Another surveillance video obtained by Eyewitness News showed a little girl with a backpack walking home from school, right near where the gunman was shooting.

The terrified girl ran away and went toward the entrance of a building but found the front door was locked. She is seen remaining by the side of a woman before someone finally opened the door.

"My heart dropped when I saw the little girl running for her life," said Awilda Cordero, a community activist who is haunted by the image of the little girl and the man firing shots.

"If he did it now and he didn't care he'll continue to do it, so we need to get him off the street," said Cordero.

Fortunately, no one was injured in the incident. Police believe the incident stems from an ongoing dispute between two gangs.