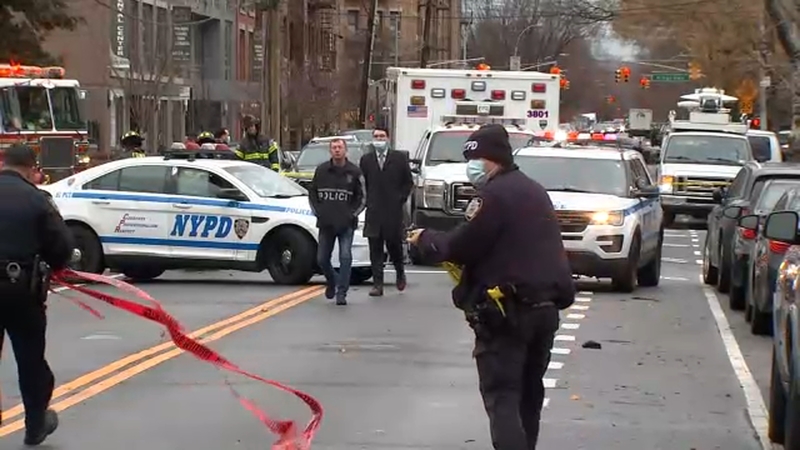 SHEEPSHEAD BAY, Brooklyn (WABC) -- A bus driver has been arrested and charged after a 15-year-old girl was killed in a hit-and-run in Brooklyn Monday morning.

Police arrested the driver, 55-year-old Brooklyn resident Aleksandr Patlakh, and charged him with a failure to stop for a pedestrian and failure to use due care. He was issued a desk appearance ticket.

According to officials, the suspect did not turn himself in - instead, police tracked him down and took him into custody somewhere in Brooklyn.

Witnesses say the bus had kids onboard when the incident occurred just before 8 a.m.

The bus was transporting children to a nearby Jewish school as classes are still in session for non-public schools.

The driver was making a slow right turn at the Bedford Avenue and Quentin Road intersection in Sheepshead Bay.

The victim, identified as 15-year-old Antonina Zatulovska, had the right-of-way, and was in the crosswalk when she was struck.

The 15-year-old girl was found lying in the road.

"I heard the screaming or the yelling and then I started to come down this way," said an eyewitness. "People started activating 911 and emergency services and within 10 seconds I already saw some of the private ambulances companies and some of the private volunteers. They responded right away."

Witnesses say the bus fled the scene, but police believe the driver was unaware that they hit the girl.

"We are heartbroken and angry, and send our deepest condolences to the loved ones of the teenager killed outside a school in Sheepshead Bay this morning. Whether they are crossing the street, standing at bus stops, or being pushed in strollers, traffic crashes continue to kill our kids and remain the leading cause of injurious death for children across New York City," Harris said.