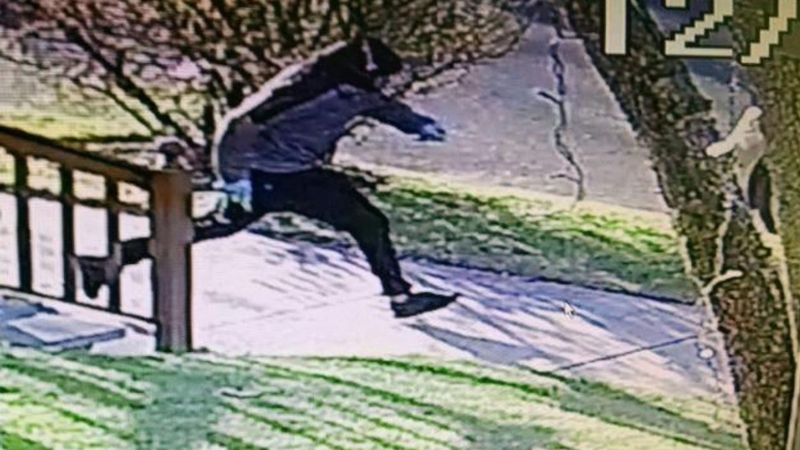 WHITESTONE, Queens (WABC) -- An intense manhunt is underway for the attacker who slashed a 16-year-old girl on her way to school in Queens Wednesday.

Police have video of the masked attacker, and investigators canvassed the neighborhood all day Thursday looking for clues.

Police sat outside as students walked to and from their schools in Whitestone.

A surveillance camera at a home on 13th Avenue captured the images the NYPD has put out, hoping someone recognizes the suspect's body frame or the way he runs away.

Police have also been going through the neighborhood, even nearby stores that sell surgical masks and gloves, because they say the attacker was wearing them when he slashed the girl from her ear, to the center of her throat twice, an attack which seemed to come out of nowhere.

Residents on the block know the girl and her relatives. She's an exchange student at the Whitestone Academy, and she had only been in this country for the past 8 months.

"They're saying it's random, who knows? You just pray that it doesn't happen again," said Whitestone resident Angelo Bartolotta.

Police did recover a box cutter at the crime scene and are testing it for DNA. They are also following up on many leads through Crime Stoppers.

The question is, what was the motive, if any. And is there some sort of pattern they have yet to find?

"Wondering where he is and who he is, that's the big thing," said Whitestone resident John Weigel. "Is he from the area, did he know the girl? It's just a shock to all of us on this block."

This is video showing the suspect in the attack:

This is video of the man NYPD is looking for in the slashing of a teen girl in Queens Weds. https://t.co/dw5psblvPJ https://t.co/tpD9lyqGna

"He is wearing a surgical mask and has surgical gloves on," NYPD Chief of Detectives Robert Boyce said. "She is slashed in her face, twice. Once from the ear to her throat, the middle of her throat, and another part of her face as well."