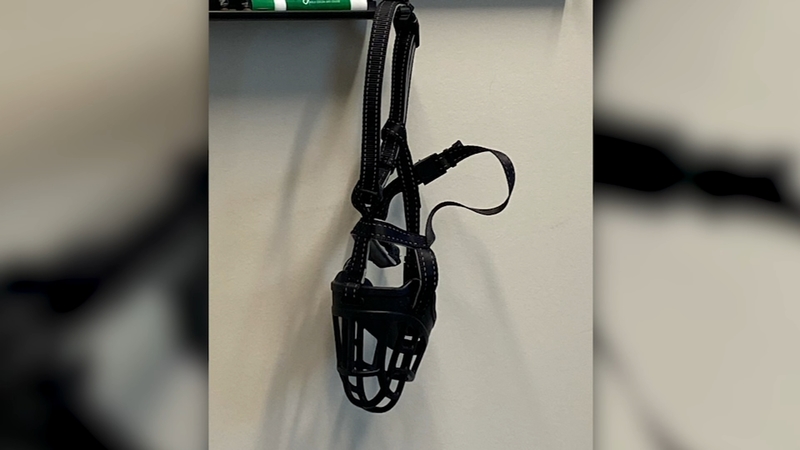 (CNN) -- Tennessee's former vaccine manager said she received a dog muzzle in the mail before she was fired.

Dr. Michelle Fiscus, a pediatrician who served as Tennessee's medical director of vaccine-preventable diseases and immunization, was fired Monday. In the week prior to her termination, she received a package containing a dog muzzle, she told CNN's Anderson Cooper on Wednesday.

Fiscus has been at the center of a political battle in Tennessee over the vaccination of adolescents against COVID-19. Before she was terminated, Fiscus released a memo citing Tennessee state law about whether minors may get medical care without their parents' permission.

Backlash to the memo from state lawmakers was swift and comes amid political polarization of vaccines as experts urge Americans to get their doses and disinformation continues to drive large portions of the population away.

Fiscus said prior to her termination, a large Amazon package was delivered to her state office addressed to her. Inside she found a dog muzzle. There was no note and Fiscus said she contacted Amazon to try and determine who sent the muzzle. Amazon refused to reveal the sender, Fiscus said.

"At first, I thought that was a joke and contacted a few friends, and then, when no one claimed it, I realized that that was something that was sent to me as some kind of a message," Fiscus said.

At the advice of others, she said reported the incident to the Tennessee Department of Safety and Homeland Security, which confirmed to CNN it is investigating the dog muzzle package.

Fiscus said she told her husband, "They obviously didn't know me because they sent me a size three which is for beagles and I'm obviously a pit bull, which requires a size six." Fiscus said she is keeping the muzzle as a souvenir.

The memo Fiscus sent before she was fired

Fiscus told CNN she sent the memo at the center of the controversy because physicians who were administering COVID-19 vaccines asked her what to do when minors showed up to be inoculated without a parent.

In response, and in consultation with legal counsel at the Tennessee Department of Health, Fiscus said she sent a memo to the doctors citing the "mature minor doctrine," which allows health care providers to decide if any child has the capacity to consent to vaccination themselves.

The policy has been in place for 34 years, was public facing on the Tennessee Department of Health website and was blessed by the governor's office, she said.

But legislators quickly began contacting the health department asking questions about the memo that some said undermined parental authority. On Monday, Fiscus was fired. Tennessee's health department told CNN by email Tuesday it could not comment on personnel matters.

Fiscus said her firing was a symptom of a trend in many public health departments across the country. In her state, she sees a "bowing of the department of health to some saber-rattling of some of our legislators who felt that it was inappropriate to share the mature minor doctrine that has been Tennessee Supreme Court case law since 1987."

Legislative leaders are now seeking answers from Tennessee Gov. Bill Lee regarding his decision to fire the state's top vaccination expert in the middle of a pandemic.

"We have all the tools we need to get out of this pandemic but the failure of leadership at the top is making this hard," Akbari said.

A halt to all adolescent vaccine outreach

Leading up to her firing, Fiscus said the department had halted all adolescent vaccine outreach, from COVID-19 communications to HPV reminders and acknowledgment of National Immunization Awareness Month.

The Tennessee Department of Health confirmed Wednesday it is temporarily halting all adolescent vaccine outreach, even for vaccines not related to COVID-19, telling CNN the issue is "polarized."

"We recognize where we are around the national conversation around vaccinations and it is a polarized conversation, and that is true in our state. And so we're just taking this opportunity to evaluate our messaging and to ensure that we're not hurting our efforts," spokeswoman Sarah Tanksley told CNN in a phone call.

Tanksley said COVID-19 and other childhood vaccines would still be available while the department of health re-evaluates the vaccination notification process. She said the goal was to ensure that vaccination reminders are sent to the parents of the adolescent.

In a few cases, immunization reminders were sent directly to minors who had contact information listed in the department's electronic health records, according to a statement given to CNN by the Tennessee Department of Health.

Tanksley said she is confident the department of health will continue to successfully communicate with parents and providers.

"This is not a monthlong evaluation period or anything like that," she said.

But Dr. Alex Jahangir, chairman of the Davidson County Board of Health in Tennessee, said Wednesday he worries the halt could result in preventable outbreaks.

Jahangir said the robust immunization program for children in the US has prevented outbreaks of diseases for decades.

"The best way to save millions of Tennesseans is to encourage vaccinations, to make them easy and not buy into any rhetoric that vaccinations are problematic," he said. "I think the politicization of vaccinations can truly have a really negative impact on Tennesseans and people around the US."