By James Barragán, The Texas Tribune 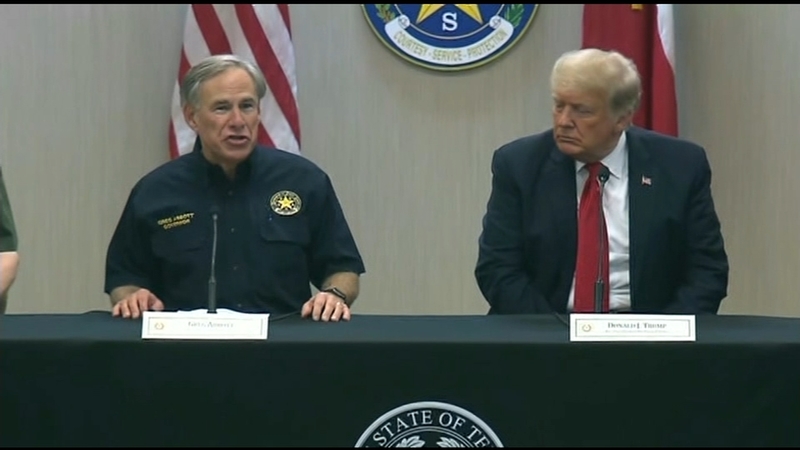 Former President Donald Trump will visit Texas on Wednesday to tour parts of the U.S.-Mexico border, where Gov. Greg Abbott has vowed to build a border wall - picking up on the unfulfilled promise first pushed by Trump during his presidential campaign.

Trump's visit comes as Republicans continue to hammer President Joe Biden's administration for an increase in apprehensions at the border. There were 180,034 apprehensions last month at the U.S.-Mexico border, and 40% of those turned back had previously crossed, The Texas Tribune reports. That's compared to fewer than 25,000 in late 2020, according to data from the U.S. Customs and Border Protection. During the Trump administration, the highest recorded number of monthly apprehensions was nearly 150,000.

Trump and Abbott, both Republicans, will hold a border security briefing with state and law enforcement officials at the Weslaco Department of Public Safety headquarters and then tour the border.

Trump made securing the border a cornerstone of his administration and declared a state of emergency in 2019 to divert federal funds to pay for a border wall.

Kamala Harris is heading to the U.S. southern border Friday as part of her role leading the Biden administration's response to a steep increase in migration.

Abbott, who is seen as a potential 2024 presidential candidate, spent much of the first half of the year railing against what he calls Biden's "open border policies" and criticizing Vice President Kamala Harris for not visiting the Texas border. When Harris visited El Paso last week, Abbott said she was "ignoring the real problem" by not visiting the Rio Grande Valley where much of the increase in apprehensions has occurred. 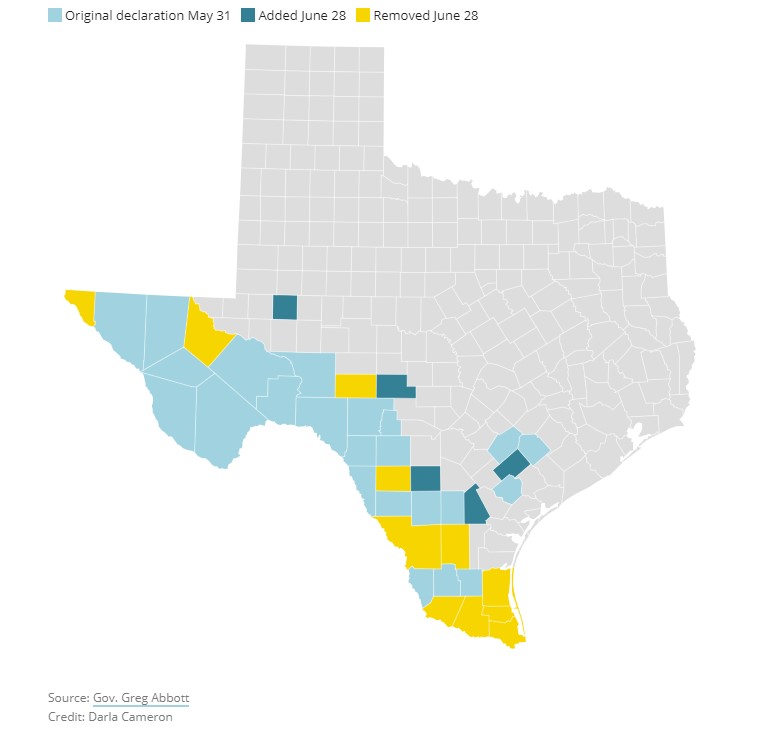 In May, Abbott took the unprecedented step of declaring a disaster in 34 Texas counties because of an increase in illegal immigration in recent months. This week, Abbott amended that declaration to remove border counties that had bristled at being included without their consultation.

It includes 28 counties that have locally declared disasters & agreed to partner with TX on border security efforts.

This will ensure resources & support are surged where they're needed most.

Abbott's disaster declaration allowed the governor to request the emergency transfer of legislative funds to begin construction of the border wall. Abbott has said the border wall will be paid for by state funds and donations from supporters. A crowdfunding website set up by the state received $459,000 in private donations in about one week.

Critics have accused Abbott of pandering to the right wing of his party ahead of an election year in 2022 when he will seek a third term. They have also cast doubts on the legality of Abbott's disaster declaration on illegal immigration and said the issue is one reserved for the federal government.

Abbott says Texas is fulfilling a role on immigration enforcement that the federal government has neglected and that any accusation that he is pushing a border wall for political reasons is "nonsense."

During her trip to Texas, Harris said she is focused on trying to understand why migrants are leaving their homes to come to the United States. She traveled to Guatemala and Mexico this month to work with those governments on mitigation strategies.

It is unclear how many miles of border wall Abbott plans to build or where in the state it will be built, but the governor said he expects the state will receive "hundreds of miles" to build the border wall between state lands that will be made available on privately donated land.

ABC13 anchor Mayra Moreno spoke with undocumented immigrants during our coverage on the border crisis. She spent time in Roma, Texas, where dozens of immigrants say it's the start of their journey into the U.S.

Trump built about 450 miles of barrier - mostly in Arizona, according to The Washington Post.

Abbott has said he plans to ask Texas landowners to donate the land for the wall.

Building the border barrier has begun.

The 1st step is to get easements on land.

The 2nd step is to clear the land for the building process.

That is what is happening here.

The Texas Facilities Commission is working to hire a program manager to oversee the entire process. pic.twitter.com/n9JUN0CymL

On Monday, he tweeted a video of construction teams clearing land for a border wall. His office said the video was taken in the Eagle Pass region.

Some southeast Texas counties are sending assistance to the border, with money coming from COVID-19 relief.