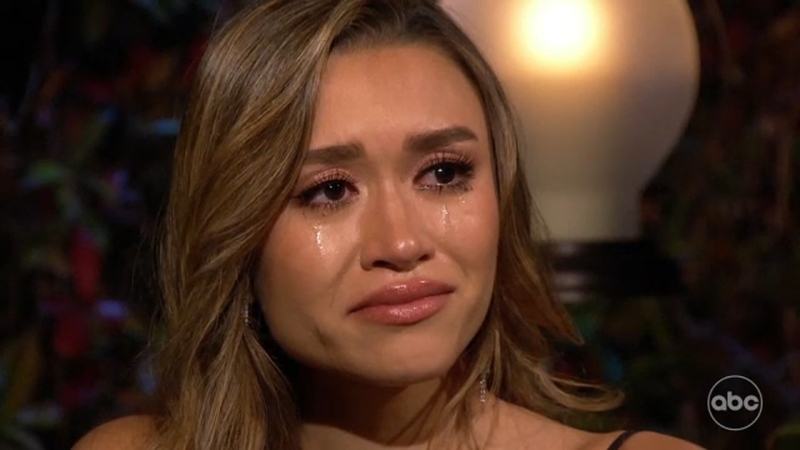 Clayton asks Sarah about her intentions on 'The Bachelor'

NEW YORK -- This week we started with the conclusion to the very tense two-on-one date with Shanae and Genevieve in Niagara Falls. Clayton asked Genevieve to go talk with him first. She told him that this week was tough for her because when she found out about the two-on-one date the atmosphere in the house got awkward. Genevieve cried as she tried to explain that if she seems distant it's because she's afraid of being vulnerable. However, she said she's open to him and wants him to know she cares.

Then Clayton pulled Shanae aside and thanked her again for her apology to the other women earlier in the week, but said that he still noticed tension. Shanae said that the situation with Genevieve is hard...um, what situation? Shanae then lied and told Clayton that Genevieve said that she wanted to go home. She said that Genevieve has an actress vibe. Clayton was clearly getting confused. He's going to be furious when he watches this show back. Then Shanae talked about being in three long-term relationships and said that she's never been in love and that she's been single for five years. She started crying and then said "tears, tears, tears, #tears!" during her interview segment.

Clayton Decides between Shanae and Genevieve
In the end, Clayton picked up the date rose and decided to ask Genevieve if she is an actress and if she's lying to him. What?! Does he realize how insane he sounds? I would get up and walk away at that point. How rude! Genevieve was completely caught off guard and the Clayton didn't know what to say and told them both he needed to step away. Shanae told Genevieve what she said and of course, Genevieve thought it was crazy and told her she wasn't going to engage with her. Clayton came back and told them that he appreciated the conversations he had with each of them, but he told Shanae he couldn't give her the rose. He gave Genevieve the rose and they walked off together while Shanae sat there stewing. Clayton thanked Genevieve for giving their relationship a chance. The women at the house cheered as Shanae's suitcase got wheeled away! They popped champagne and celebrated. "Ding dong, the shrimp is dead," they said.

Cocktail Party
During the cocktail party before the rose ceremony, Clayton continued to grow his connection with Sarah. He also seemed very serious about Rachel and his feelings for her. Mara and Clayton shared some poutine together. But then, she got interrupted by Serene practically a minute later and started crying.

That meant that Marlena and Hunter were eliminated. Clayton then announced to the women that they were traveling to Croatia.

One-on-One with Teddi
Once in Croatia, Clayton announced to the women that he would be taking Teddi on a one-on-one date to explore. They walked around the town as Clayton held an umbrella over them as it sprinkled outside. Teddi said that there's something big she has to tell him at dinner.

Clayton and Teddi talked about how they had so much fun having a "regular" day together even though they were in the amazing setting of Croatia. Teddi dropped the bomb on Clayton that she's a virgin. She said that her mom had a baby when she was very young and so there was a lot of pressure on her not to make the same mistake her mom did. She did make a point to tell Clayton that she "is a sexual person and does enjoy that aspect" of herself. She says she doesn't feel she has to wait for marriage but does plan to wait until she's in love. Clayton told Teddi said he would have never known that about her but that he's more concerned about their emotional connection. She told Clayton that she's never been in love. He asked her if she can be fully vulnerable, and she told him that she's really trying even though being in "this environment" of "The Bachelor" there's the possibility of getting hurt. Teddi told Clayton she just wants to feel like she can trust someone and feel safe and she says she's feeling those things with him. Clayton offered Teddi the date rose!

Group Date
"Serene, Rachel, Susie, Gabby, Eliza, Genevieve, Mara, it's an honor to fall in love with you," the date card read. So, that meant that Sarah was getting a second one-on-one date before some of those women ever got one. Mara said she was going to try her best on the group date and be positive. Clayton and the women walked up to some people dressed up as knights who were sword fighting! A Croatian woman spoke to the group about how the women there fight shoulder to shoulder with the men! So they all dressed up to fight for Clayton. They tested their strength by pushing each other out of a circle with shields. Then, there were plates of pig liver, cow stomach, pig brains, and fish heads where they had to eat their eyes. It was so gross, they all started dry heaving and vomiting. Serene and Mara battled it out eating the disgusting food, but Serene won that one. Lastly, the women had to bow before Clayton and tell him their feelings and what they were fighting for. Mara had a whole rehearsed and rhyming speech! I have no clue how she pulled that off so quickly. In the end, Serene won the challenge though, and was knighted "the queen." Poor Mara!

Clayton had hometown dates on his brain and he wanted to check with the women to make sure they want to bring him home.

Rachel told Clayton she is falling for him, so hard, and it terrifies her. She said, "I don't have a doubt in my mind that I would want to bring you home to meet my family." Mara told Clayton that she is discouraged because she got the last rose during the rose ceremony and has never had a one-on-one. She told him that she didn't think it great that he was giving Sarah a second one-on-one before she had one at all. Mara said that she knows some women aren't ready for marriage and others are just too young. Clayton thanked her, but never kissed her. In the end, he gave the group date rose to Rachel, again!

Clayton Gets a Note
After the group date, Clayton returned to his room to find a letter that read, "Clayton, meet me at the clock tower." It was Susie! Clayton was happy to see her and happy that she was smiling. She felt like she wasn't able to get enough time in with him during the group date so she wanted another chance to make another impression before Sarah went on her second one-on-one date. They climbed up the stairs to the top of the clock tower. Susie told Clayton that it is hard watching him make connections with other women but she wanted to let him know that she's falling in love with him. He smiled and said, "I can't believe this. It's a phenomenal thing." He said it might be the happiest he's been since he's started this journey.

One-on-One Date with Sarah
Mara told Gabby that she told Clayton that some women aren't ready for marriage. Gabby nodded her head and agreed. Mara is hoping that Sarah doesn't make it past her one-on-one date. Clayton spoke to Jesse about his fears concerning Sarah not being ready for marriage. Jesse told him to use his own decision-making and keep his eyes and ears open.

Sarah showed up and they shared a glass of wine. Is this her one-on-one? They didn't get a day date? Sarah thanked Clayton for spending extra time with her. Clayton asked her if she's ready for marriage because someone told her she might not be ready for that. Sarah was completely shocked and said that she can completely see a future with Clayton and it upset her that he doesn't know in his gut that she's being truthful. "I have nothing to gain from lying to you or hurting you," Sarah said. She seems like she's there for the right reasons and Mara seems jealous, how does Clayton not see this? I'm getting frustrated with him for believing the fake drama. Then he told Sarah he was confused about her. He stepped away and Sarah got up and started crying asking a producer what on earth was happening. She was completely caught off guard and confused why he was questioning her. But then he came back and apologized and said he doesn't question her sincerity, so he offered her the rose. She said "yes." Clayton said it was sad Sarah had to go through this but he is the one who put her through this. He didn't even have to bring it up! He's lucky she still accepted the rose.

Next Week
Sarah comes back into the house full of confidence and ready to take down whoever said she wasn't ready for marriage. But, it appears she starts to lose the support of the other remaining women.

Clayton Echard has been named the season 26 "Bachelor" on ABC.