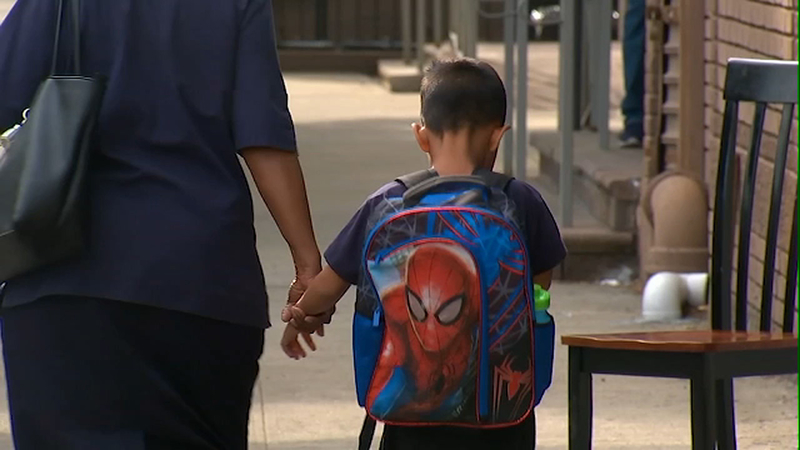 Immigration advocates unable to check on children in the Bronx

MELROSE, Bronx (WABC) -- A group of advocates made an unsuccessful attempt Tuesday to check on the welfare of 58 new immigrant students at The New Life School in the Bronx.

The group, which included DNC Chairman Tom Perez and New York Assemblyman Michael Blake, spoke briefly with school officials but were not allowed inside.

"Until the federal government gives approval of us being able to see what is happening, they were not able to (let us in)," Blake said.

The first time the public has seen inside one of the facilities contracted by the federal government was in a video from the Cayuga Center in East Harlem. The center currently cares for several hundred immigrant children.

MSNBC aired the video along with images of a terrified girl named Jessica. She was asked, "Are you hungry? Why are you crying? You want to speak to your dad?" The little girl said, "My mom."

City and state officials have denounced President Donald Trump's zero tolerance policy has separated parents and children as they try to enter the country.

President Trump, who spoke at a rally in South Carolina, defended his policy.

"I said today, I don't want judges," he said. "I want ICE and Border Patrol agents."

Governor Andrew Cuomo said 1,300 children have been sent to agencies in New York, where efforts have been made to check on their welfare.

Areli Silvestre, a DACA resident, can relate to the children's plight.

"Unlike them, today I will be able to go home and say, 'Hi mom. How was your day?'" she said. "But these kids aren't able to go home to their parents to say to them, 'What happened today?' And that's very scary."

The advocates vowed to continue their efforts to check on the welfare of the children and reunite them with their parents.