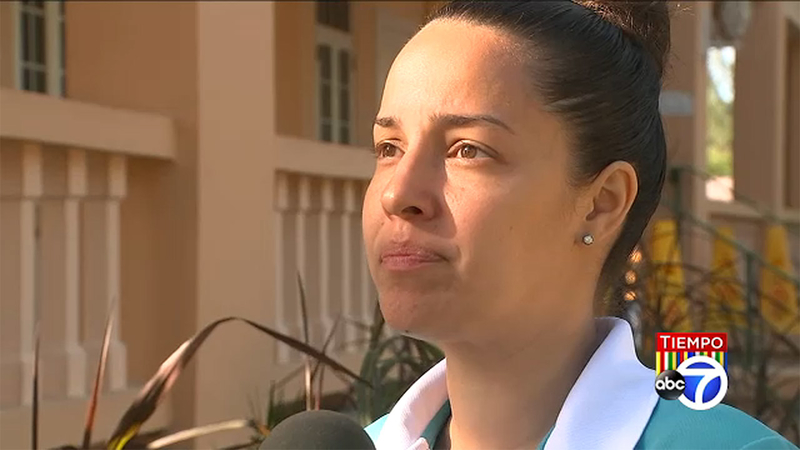 PUERTO RICO (WABC) -- The people of Puerto Rico, roiled by a frightening series of earthquakes and still reeling from Hurricane Maria, remain both resilient and fearful that more temblors are coming.

In a special edition of WABC-TV's "Tiempo," Joe Torres takes a look at the devastation and emotional toll in Puerto Rico following the earthquakes and aftershocks that have rocked the island.

Torres found that relief efforts are in full swing to administer aid to Puerto Ricans who are struggling without power and with an infrastructure that can't afford to take any more hits.

Torres reports he noticed a tremendous show of solidarity among the people of Puerto Rico, who have come from every corner of the island to help their brothers and sisters.
EMBED More News Videos

"We are collecting money in a softball tournament in Orlando, Jacksonville and Puerto Rico, and with that money we're cooking the food - not giving cans - we're giving the food live," one resident said.

But for many residents in the affected areas, it is the fear and stress surrounding the next quake that leaves many sleepless and stressed.

"It breaks my heart, because a lot of people here had just passed Hurricane Maria, and now this going on is not easy," resident Anna Crespo said.

Indeed, unlike Hurricane Maria which dealt a ferocious blow then left, the earthquakes and aftershocks that have devastated the southwest corner of the island are recurring, and it's unknown when they will end.

The ground in southwest Puerto Rico has been shaking off and on since Dec. 28, with more than 1,280 earthquakes, of which more than 100 were felt and more than 70 were of magnitude 3.5 or greater. Recent quakes have toppled homes and schools.
EMBED More News Videos

The flurry of earthquakes topped by a magnitude 6.4 temblor that killed one person and damaged hundreds of buildings has many accusing the Puerto Rican government of being caught unready again.

"I don't believe in the government here in Puerto Rico because they're a bunch of crooks," Crespo said.

Residents are staying in shelters because they are too afraid to stay in their own homes.

"We have to get a large number of inspectors here to look at these homes so people can be sure that there home is safe to sleep in," Gov. Andrew Cuomo said.

The large groups of shelters that have been set up are being called "tent cities' and house anywhere from 200 to 1,500 families a night. The tents provide food, water and emergency services.
EMBED More News Videos

The federal government has released billions of dollars in relief funds that residents hope will go a long way in supporting the recovery and rebuilding efforts.

Despite the disaster, Puerto Ricans remain resilient and hopeful for the future.

For those at home who would like to donate and lend a helping hand, organizations like the American Red Cross, Hispanic Federation, Catholic Charities of New York and Comite Noviembre have come together in the relief effort.
Report a correction or typo
Related topics:
earthquaketiempodisaster reliefdisasterpuerto rico
Copyright © 2022 WABC-TV. All Rights Reserved.
TOP STORIES
Man fatally shot while riding Q train into Manhattan
3 people killed in crash near catering hall on Long Island
Body of teen who disappeared while swimming in NJ reservoir found
Something strange is happening with our universe: NASA
NYPD searching for man behind Harlem stabbing
AccuWeather: Cooler start to the week
Buffalo mass shooting victims laid to rest one week after tragedy
Show More
Israeli flags fill Upper East Side for 'Celebrate Israel' Parade
78,000 pounds of infant formula arrives in US
NJ police impose curfew after large party gets out of hand
Suspect breaks into NYC apartment, stabs man to death
Empire State Building lit to honor Notorious B.I.G.'s 50th birthday
More TOP STORIES News