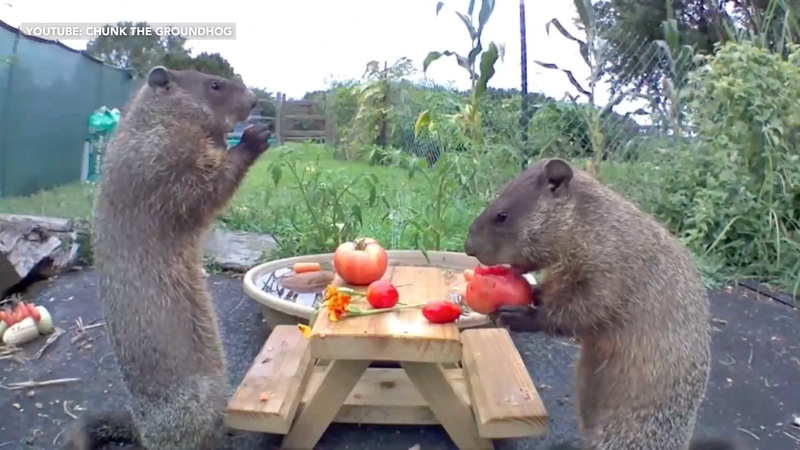 MIDDLETOWN, Delaware -- "I never looked at a groundhog from this point of view before," said Jeff Permar.

Typically thought to be a nuisance, groundhogs have become the lifelong gardener's best friends.

In 2019, Permar noticed his crops had large chunks bitten out of them. He purchased a motion-sensor camera to catch the perpetrator. That's when "Chunk" stole his vegetables and his heart.

"Sure enough, this groundhog comes popping up right in front of the camera," said Permar. "He was so smug, he was like, yeah, I'm eating your veggies, what are you gonna do about it?"

Permar uploaded the videos to social media, where they have since gone viral and spawned a worldwide audience of Chunk fans. The Instagram page for Chunk the Groundhog is nearing 500,000 followers. Fans from New Zealand, South Korea, and even Philadelphia have filmed themselves munching on veggies for the #ChunkChallenge.

"He was so cool that I embraced him, and went from being a pest to being a friend almost, you know, like part of the family," said Permar.

Chunk's story did not stop when he went into hibernation. In 2020, Chunk woke up with a girlfriend and three baby groundhogs. Fans on Instagram voted on the names for each newborn as they were discovered by Permar.

"I was not expecting to have five groundhogs," he said. "Here we are, we got Chunk, Nibbles, Nugget, Chip and Chibbles."

Despite the 2021 calendar looming on Groundhog Day, Chunk and his family are still in hibernation.

"He's not like Punxsutawney Phil, he's sound asleep right now," said Permar on a snowy day. "I mean, would you want to come out in this? The Chunks are on their own schedule."

In celebration of the holiday, Permar plans to release an original song, titled, "Chunk Don't Eat Junk." After that, all eyes are on the backyard as Permar awaits the day Chunk and company return. He hopes to prepare a live streaming option for those interested in seeing Chunk in real-time.

Permar, who lives with a family of five himself, says that Chunk's little family has changed his life.

"I'm more compassionate towards animals and the struggles that they go through," he said. Permar is confident that Chunk has inspired his worldwide audience to feel the same.

"They're just out here trying to survive trying to live," he said about the groundhogs. "And if I can provide for them, that's what I'll do.