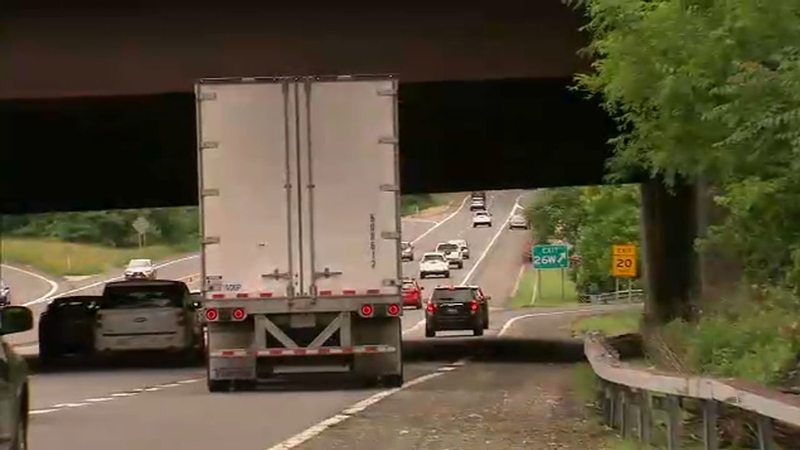 Call for change to protect drivers, pedestrians on The Hutch

HARRISON, Westchester County (WABC) -- Trucks slamming into bridges on the Hutchinson River Parkway have caused so many delays and damage, there is now a call for immediate changes to protect drivers and pedestrians.

It happened right before an Eyewitness News camera on Monday: A tractor-trailer truck misguidedly pulling onto the ramp leading to the Hutchinson River Parkway.

Trucks are not allowed on the parkway. We caught up to the driver just after he stopped before merging into traffic. He was quickly shown the error of his ways by a police officer, averting what has become a recent series of truck and low bridge collisions.

"Get this thing down to the occasional incident rather than this continual flow of accidents," says Westchester County Executive George Latimer.

Greatly concerned by the reoccurring problem, Latimer believes a solution must be found.

"We need to pull this thing together. We need to have a comprehensive plan. Four, five, six steps. The state is an important player in this. The county has its role. The local governments have a roll, and just do it," Latimer says.

Some believe the truck drivers are not using commercial GPS which would alert them to the parkway being off limits. There are new sensors and warning signs, but this one did not go off when the truck went past.

"Safety is our top priority which is why the state has implemented several measures to reduce the number of bridge strikes on our roadways, including more and clearer signage on the parkways, new pavement markings, and the installation of over-height vehicle detection systems at strategic locations," a NYSDOT spokesperson said.

We are waiting to hear from state DOT officials as to why the warning sign did not work.

"People are going to pass through a sign all the time," says one driver on this road knows as The Hutch.

Other drivers were even offering a few suggestions.

"Better warning signals. And also the GPS is a big thing with that. Because a lot of time GPS tells them to go there and they're not supposed to go there," another driver said.

"Well I think they have signs that warn them to stay off. They need to be made more aware of it," a livery driver said.

County Executive Latimer is hoping to work with state DOT officials and the Trucking Association of New York.