The accident happened at about 2:30 p.m. Monday on the southbound side of 287 just beyond Exit 26. Authorities say it resulted from a police pursuit that started on Route 78 in Newark, with police chasing a stolen vehicle.

The driver of that vehicle, a black Jeep Grand Cherokee, lost control and crashed, police say. The vehicle crossed to another lane where it hit a silver minivan occupied by one man.

The minivan spun 180 degrees and hit the patrol car, which was set up in the left shoulder. The suspect's vehicle hit the guardrail and broke down. 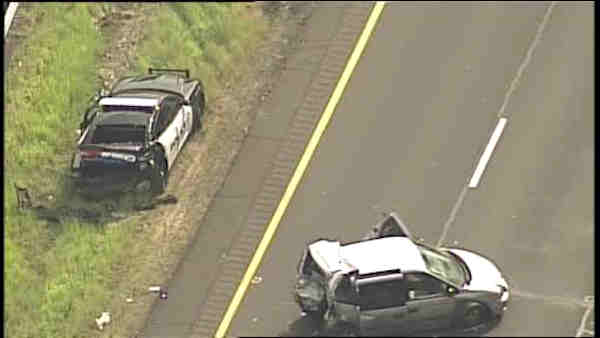 Authorities had planned to deploy stop sticks, which are tire deflation devices, at the location where the accident happened. But they were not deployed because the circumstances did not meet the Attorney General's guidelines, mainly due to the amount of traffic.

The civilian and the Bernards Township officer in the cruiser were both taken to Morristown Medical Center. The officer had neck and back injuries.

The suspect's vehicle was occupied by two men and one woman, who is pregnant. All were taken into custody at the scene. The pregnant woman was airlifted to Morristown Medical Center to be evaluated.

Charges against the three are pending.

Traffic was backed up for miles from the scene of the crash.