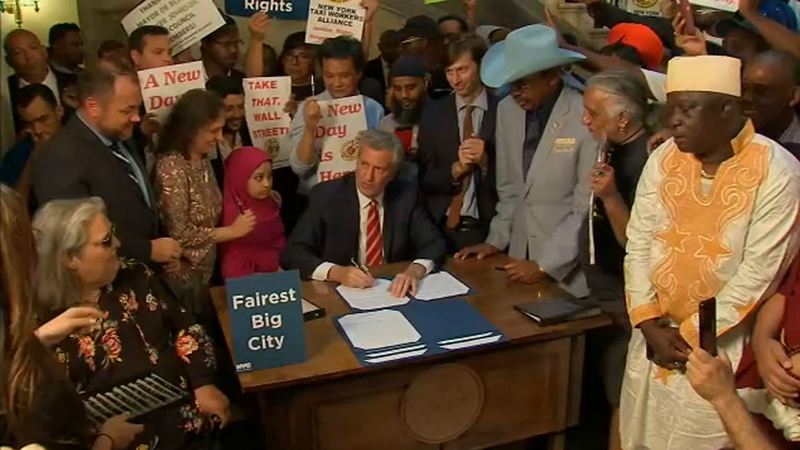 NEW YORK (WABC) -- New York City has become the first in the nation to put a cap on the number of ride-share companies like Uber and Lyft allowed on the street.

Bill signing by @NYCMayor to cap FHV licenses for next year @ABC7NY pic.twitter.com/lOh77gPU7E

The City Council passed a bill last week that imposes a one-year ban on new licenses for app-based for-hire vehicles.

"The City is sending a clear message: we're putting hardworking New Yorkers ahead of corporations," said Mayor Bill de Blasio. "The City Council has spoken boldly, and now we can act. We are taking immediate action for the benefit of more than 100,000 hard-working New Yorkers who deserve a fair wage, and halting the flood of new cars grinding our streets to a halt. I'd like to thank Speaker Johnson, Council Member Levin, the City Council and advocates for seeing this legislation through."

Drivers of those for-hire vehicles lined up for last-minute registration of their cars before the bill was signed:

Last minute sign up before #NYC deadline to get For Hire Vehicle License Latest @ABC7NY pic.twitter.com/VlT7zbx2HD

Among the drivers was Ibrahima Diallo, who had previously rented his car but wanted to register for his own car. "I try to get my own car," said Diallo. "I don't want to rent outside and if I did not today I can't do for the next 12 months."

Over the past several days more than 10,000 for-hire drivers waited in long lines at Uber help centers to work through the for-hire vehicle licensing process.

Some New Yorkers don't think the bill is a good deal, but lawmakers hope the limitations will help reduce congestion and protect taxi drivers who have seen a steep decline in income.

"We are doing what is right for the city of New York," said City Council Speaker Corey Johnson. "And we are saying that just because you are a multibillion dollar company doesn't mean you shouldn't be regulated like everyone else."

The legislation also allows the city to set a base-pay rate for drivers that could be $17.20 an hour. The minimum compensation rule will go into effect by October.

Backers of the proposals said both the traditional yellow cab industry and drivers for app-based services are suffering as for-hire cars flood the city's streets. They said the growth of ride-hailing apps has also worsened traffic congestion.

"Today, New York City is hitting pause on the economic hemorrhaging that has left tens of thousands of immigrant families in chaos and despair," the New York Taxi Workers Alliance said in a statement Tuesday.
"Driver incomes across all sectors have been in a downward spiral as Uber and Lyft flooded our streets," the advocacy group said. "The immediate cap on new for-hire vehicles puts a stop to that. Now, yellow taxi, green cab, black car, livery, Uber and Lyft drivers can finally hope for stability."

Opponents of the legislation say Uber and Lyft provide much-needed service to areas outside of Manhattan that are underserved by traditional taxis. They also said black and Hispanic New Yorkers need ride-hailing apps because taxi drivers often won't stop for them.

"They're talking about putting a cap on Uber, do you know how difficult it is for black people to get a yellow cab in New York City?" The Rev. Al Sharpton previously tweeted.

In a statement from Uber, the company said, "The Council and Mayor rushed through a 12-month pause without stopping to think about the consequences for hard-working drivers who have been saving up to get out of a rental and into a car they own."

---
Some information from The Associated Press