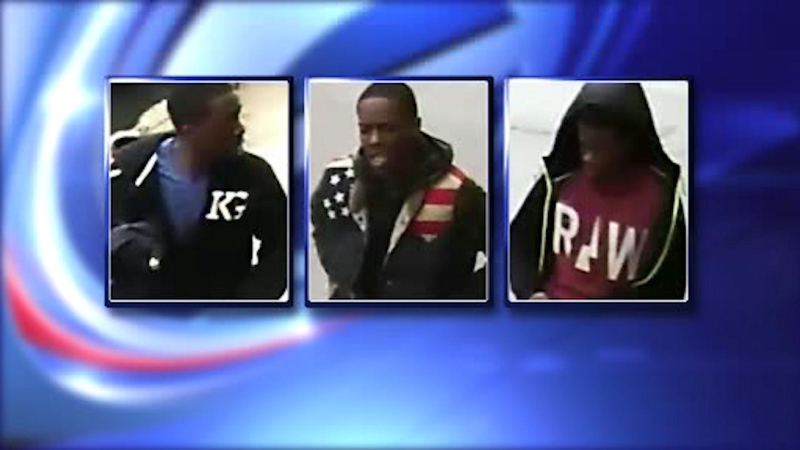 CANARSIE, Brooklyn (WABC) -- Police are searching for three men after a deadly hit and run in Brooklyn. Police released surveillance photos of the suspects Monday night.

At E. 94th Street and Avenue K in Canarsie there was little sign of the deadly accident that claimed a life there Sunday.

Though, neighbor Fulton Titus remembers the horrifying scene all too clearly.

"I saw the woman lying on the floor in agony. She was so much in pain," Titus said.

Titus was heading to his own parked car when he saw a stolen SUV hit another car, run-down a married couple standing on the corner, and finally come to rest against a fence.

That's when Titus says he saw two young men running away from the scene. It's not yet known what the third person's involvement was in this case.

"At that point, I called 911. I was more concerned about their people that got hurt in the accident. I'm hindsight, I wish I had taken my car and followed the running teenagers," Titus said.

The injured pedestrians were rushed to nearby Brookdale Hospital where 51-year-old Chooi Tan died.

Her 57-year-old husband is still being treated.

Police confirmed Monday that the SUV involved in the deadly crash was stolen last Friday.

"Keys were left in the ignition; someone ducked inside a grocery store there, in and around avenue D and the car was taken at that point. We have some images that we have seen from that theft, we are going to put those out later today," said Chief Robert Boyce, NYPD.

Titus among those hoping the photos will lead to an arrest.

"Imagine someone just crossing the street and then, you know, they die. I was very sad," Titus said.