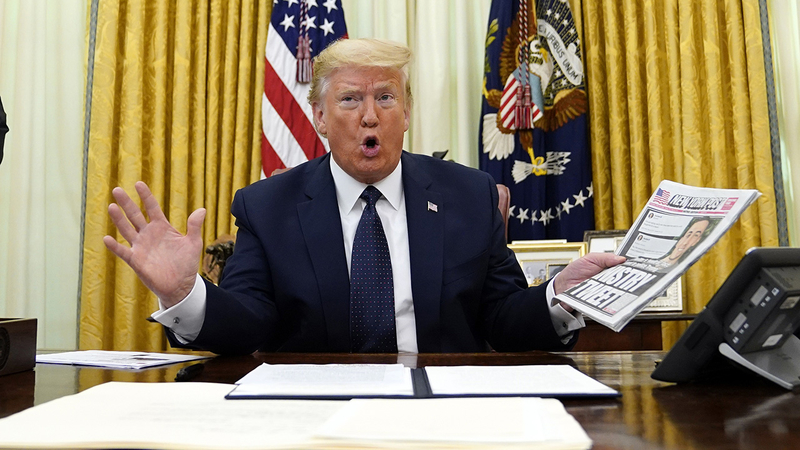 WASHINGTON -- The latest: President Donald Trump attempted to explain his tweet claiming that "looting leads to shooting," saying "that's why a man was shot and killed in Minneapolis on Wednesday night."

"I don't want this to happen, and that's what the expression put out last night means It was spoken as a fact, not as a statement. It's very simple, nobody should have any problem with this other than the haters, and those looking to cause trouble on social media. Honor the memory of George Floyd!"

This is a breaking news update. A previous version of this report is below.

Looting leads to shooting, and that’s why a man was shot and killed in Minneapolis on Wednesday night - or look at what just happened in Louisville with 7 people shot. I don’t want this to happen, and that’s what the expression put out last night means....

President Donald Trump added fuel to racial fires Friday as he threatened to take action to bring the city of Minneapolis "under control," calling violent protesters outraged by the death of a black man in police custody "thugs" and reviving a civil-rights era phrase fraught with racist overtones.

"When the looting starts, the shooting starts," Trump wrote in a tweet that was quickly flagged by Twitter as violating rules against "glorifying violence." The White House said the president "did not glorify violence. He clearly condemned it."

....These THUGS are dishonoring the memory of George Floyd, and I won’t let that happen. Just spoke to Governor Tim Walz and told him that the Military is with him all the way. Any difficulty and we will assume control but, when the looting starts, the shooting starts. Thank you!

Trump's comments came after protesters torched a Minneapolis police station on Thursday night, capping three days of searing demonstrations over the death of George Floyd, who was captured on video pleading for air as a white police officer knelt on his neck.

The president's reaction - a day after he had decried Floyd's treatment and vowed justice for his family - underscored Trump's complicated relationship with race as he tries to maintain a law-and-order" mantle while also trying to build his appeal among black voters during an election year. And it highlighted his refusal to avoid controversy or cede the spotlight even as the battered nation tries to make sense of another killing and reels over the mounting COVID-19 death toll.

Trump, in his tweets, borrowed a phrase once used by former Miami Police Chief Walter Headley in a 1967 speech outlining his department's efforts to "combat young hoodlums who have taken advantage of the civil rights campaign." In the speech, Headley said his department had been successful "because I've let the word filter down that when the looting starts, the shooting starts."

"We don't mind being accused of police brutality," he said in the same speech, according to news reports from the time.
RELATED: Police officer who knelt on George Floyd has been arrested

The White House did not respond to questions about where Trump had heard the phrase and what he meant by it. But Trump said Friday afternoon that he'd been trying to say that, "Looting leads to shooting."

"I don't want this to happen, and that's what the expression put out last night means," he tweeted. "It was spoken as a fact, not as a statement. It's very simple, nobody should have any problem with this other than the haters, and those looking to cause trouble on social media. Honor the memory of George Floyd!"

But criticism was nonetheless swift.

"It's not helpful," said Minnesota's Democratic Gov. Tim Walz, during a news briefing Friday. "Anything we do to add fuel to that fire is really, really challenging."

"During these times, we can condemn violence while also trying to listen, to understand, to know that there is deep frustration, rightfully so, in our country -- that there has not been enough action on creating equality, opportunity, and in health care, and in a time of this COVID-19 epidemic, it's laid bare all of that," he said.

And Jeffery Robinson, the director of the American Civil Liberties Union's Trone Center for Justice and Equality, said Trump's message was "hypocritical, immoral, and illegal."

Twitter's action Friday morning marked the second time this week that the social media giant has flagged the president's content, this time adding a warning label that prevented it from being shared or liked. The White House, trying to skirt the blockage, reposted the message on its own official Twitter account Friday morning. Twitter quickly flagged that tweet, too, thus accusing the White House of promoting violence.

Floyd's death and fury it has sparked are set against the backdrop of a heated presidential election and competing political priorities for the president.

Trump has been accused of stoking racial tensions and exploiting divisions for personal gain since long before he ran for president, beginning with the full-page ads he ran in 1989 calling for the death penalty for the Central Park Five, five young men of color who were wrongly convicted of assaulting a white jogger.

Trump - who rarely holds his tongue - has been silent in the face a long list of high-profile police-involved killings of black men, including Eric Garner, who died after being placed in a chokehold by police and whose dying words, "I can't breathe," became a rallying cry for the Black Lives Matter movement. (Trump has instead invoked those words on several occasions to mock political rivals, even bringing his hands to his neck for dramatic effect.)

Since even before his 2016 campaign, Trump has portrayed himself as a staunch defender of law and order. He has often spoken in front of law enforcement groups, and in one speech appeared to advocate for the rougher treatment of people in custody, speaking dismissively of the police practice of shielding the heads of handcuffed suspects as they are being placed in patrol cars.

At the same time, Trump and his campaign have tried to make inroads with black Americans, particularly after his presumptive Democratic opponent, former Vice President Joe Biden, suggested last week that black voters who support Trump "ain't black." A bedrock of the Democratic base, black Americans are unlikely to embrace Trump en masse, but his campaign believes even a marginal shift could make a difference - and send a message to white voters uneasy about the president's charged rhetoric.

Meanwhile, the unrest complicates the Trump campaign's plans for Minnesota, one of the key swing states he hopes to win in November.

Trump's back-and-forth with Twitter comes a day after he signed an executive order challenging the site's protections against lawsuits as he accuses it of stifling conservative voices.

The company said it had flagged Trump's latest tweet "in the interest of preventing others from being inspired to commit violent acts," but kept it accessible to users because they felt it was "important that the public still be able to see the Tweet given its relevance to ongoing matters of public importance."

Supporters of the president balked at the move.