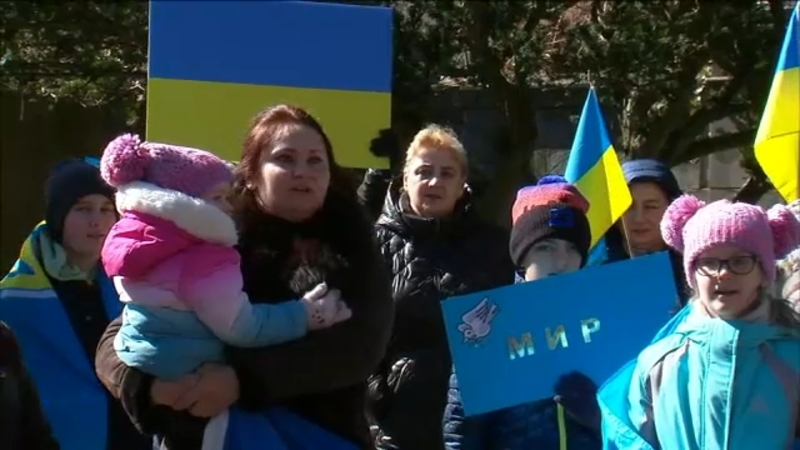 GLEN COVE, Long Island (WABC) -- With Russian troops continuing to close in on Ukraine's capital, local efforts are already underway on to help those attempting to push back their Russian aggressor.

As the bombing continues over Ukraine, on Saturday, 46-year-old Ohleh Kovlskyy sits below ground in Golordox, about 300 miles from Kyiv.
EMBED More News Videos

Marcus Solis reports on the latest on the Ukraine invasion.

"We're just defending the water pump station," Kovlskyy said. "We protect it from the Russian aggressor."

Kovlskyy's wife and children spent the last two nights hiding in their basement, as he and other civilians band together to protect water reserves and other infrastructures.

"Proud that I can defend my country from Russian aggressor," Kovlskyy said.

He talked to Eyewitness News reporter Chantee Lans through FaceTime with his sister Iryna Boudcha in Glen Cove, Long Island.

"We can support them with our prayers from the bottom of our hearts," Boudcha said.

She's part of a group called the Ukrainian Members of Long Island, who are part of a push led by Republican Congressman Lee Zeldin and Nassau County Executive Bruce Blakeman, to remove Russian diplomats from the Killenworth compound.

"Expel these Russians from Nassau County. We don't need them here," Blakeman said.

In a video posted to Twitter Saturday, Ukrainian President Volodymyr Zelenskyy says he and the people of Ukraine are defending their country as Russian aggression escalates.

The 2,600 square-foot mansion was bought by the Soviet Union to become the country retreat of the Soviet, and later Russian delegation to the United Nations.

Back in 2016, the Obama administration shut down another Russian compound in Old Brookville as punishment for their alleged interference in the presidential election.

"I'd like to see us discuss it with the executive branch and the United Nations people," Congressman Tom Suozzi said. "We can't stop all of the diplomatic challenges that we have."

As for Kovlskyy, he says he's not frightened because there are other people like him with brave hearts that want to defend their country.

Kovlskyy is making his two-year-old niece and brother-in-law proud.

"It's scary, but I am also proud of him. I'm proud of him for standing up," brother-in-law Denis Boudcha said.


Meanwhile in New York City, there was a show of support and a call for action to help people caught in the middle of the violence in Ukraine.

People gathered in Times Square to not only offer support, but also to raise awareness about what is happening. Many still have family and loved ones in Ukraine.

People gathered in Times Square today to not only offer support -- but also to raise awareness about what is happening.

Some people say they've been told not to ask their relatives where they are out of fears their calls are being monitored.