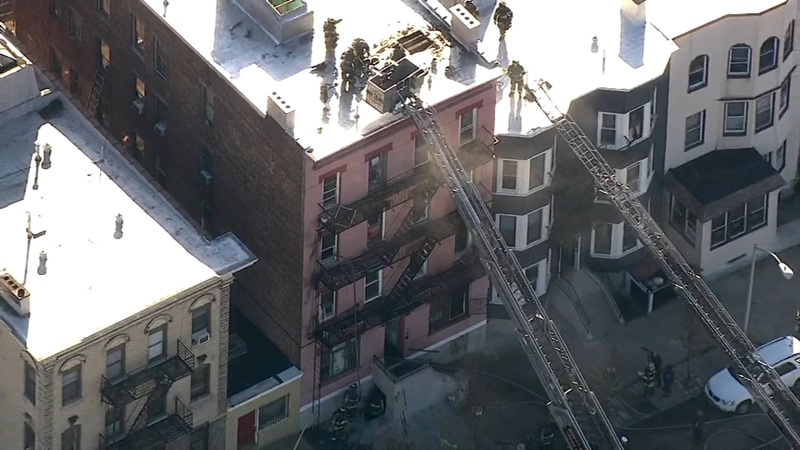 UNION CITY, New Jersey (WABC) -- Firefighters made a dramatic rescue in New Jersey Tuesday morning as they helped people trapped on the fire escape of a burning building.

The third-alarm fire broke out on the first floor of a 4-story building on Kennedy Boulevard in Union City.

The blaze quickly raced through the building when the flames traveled through a void in the walls.

16 families live in the building and all made it out safely but had to make a harrowing escape, as the halls filled with smoke.

They went out to the fire escape but needed help to get down from the building.

"I opened up the door and couldn't see anything, it was just black smoke," said resident Jacob Wilkins. "So I broke through the kitchen window and got everybody out onto the fire escape. Once I got onto the fire escape I realized the ladder was jammed, it would not go down so we ended up standing out there. They were breaking windows, glass was falling on top of us. "

He said firefighters had to cut a fence down in the backyard to put another ladder up to rescue those who were trapped..

"I thought I was gonna die," said resident Valerie Lee. "It's pretty bad, and the fire escape don't even go down and don't even work, so that's really bad."

Union City Mayor Brian Stack says an old firehouse that has been transformed into a shelter will be used to house the displaced families.