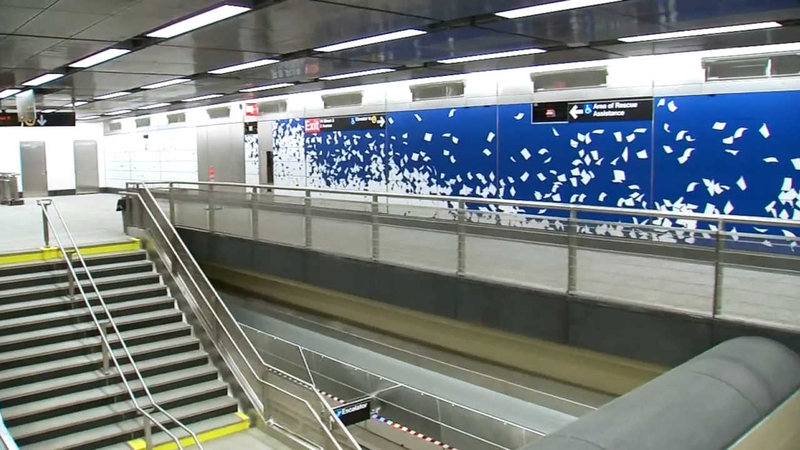 UPPER EAST SIDE, Manhattan (WABC) -- The December 31st deadline for the Second Avenue Subway is quickly approaching, but there is still heavy equipment, and plenty of work to be finished on this project. Portions of Second Avenue are still a construction zone, and traffic is also experiencing detours. That massive project is trying to be up and running by the first of the year.

"I would like to extend an invitation to all of you for the opening of the Second Avenue Subway on Sunday, January 1st, 2017," said MTA Chairman Thomas Prendergast.

Eyewitness News got an exclusive look in the East 96th Street station with its large open platforms and brightly lit waiting areas. Work is going 24/7 to meet the inaugural run of the Q train planned for the 31st, and the first revenue run on January 1st.

An exclusive look inside the 2nd Avenue Subway construction site

"Despite all the reductions, despite all the alterations in the schedule, we are still going to make the same deadline," said Governor Andrew Cuomo.

During the decade-long construction, businesses experience sidewalks squeezed behind construction barriers. Some shoppers shy away from the dust.

Michael Kane is the owner of Park East Kosher Butcher Shop and Deli.

"We were very resourceful, and when times were tough, we think how to fix it, and that's what we did. We kept moving along, and thank God we were able to move forward with the support of the community," says Kane.

The MTA opened a community information center to answer concerns of businesses and residents. There were reminders that businesses were still open - new sidewalks were open, and an end is in sight.

"I'm just happy that it's being completed and we are looking forward to a good future," added Kane.

Residents, too are now seeing a wide Second Avenue with improved lighting and parking.

"It's starting to look like it used to look like - a beautiful avenue with sidewalks and outdoor seating and dining. Hopefully we will get back to that experience," says area resident Tom McCarney.