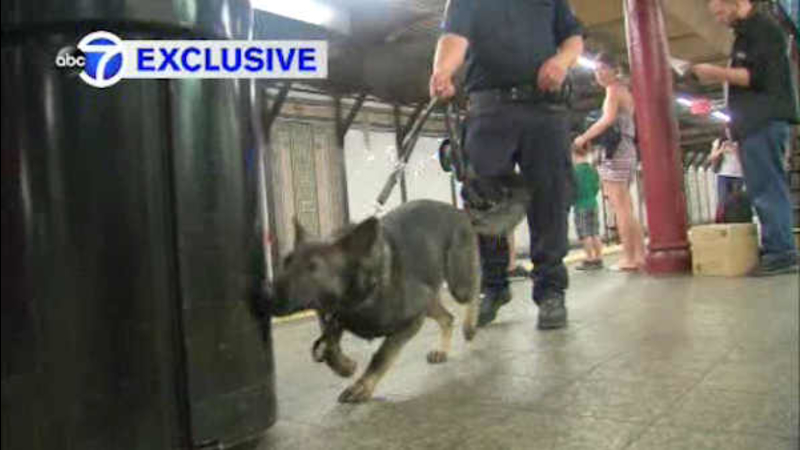 NEW YORK (WABC) -- There is a new line of defense against terrorism in New York City, and even though it walks on four legs, it could save countless lives.

A "Vapor Wake" dog is specially trained to detect explosives when they are in motion or in a crowd, making public places like subway stations, airports and parks safer for travelers.

Highly trained and highly specialized "Ellis" and his handler, police officer Kevin Belavsky, work in some of the most challenging conditions.

Down in the noise, the heat and the grit of the subways, the 8-year-old Labrador retriever was working for a scent.

As people rushed past him, in their wake of air, he searches for potentially dangerous vapors.

And, catching a scent in the red backpack on a decoy, he started pulling Officer Belavsky to the source and was then rewarded.

"Have him air scent," said Officer Belavsky. "As the people come I make sure Ellis can hit everyone of those people and Ellis will give me that determination if it's clear or not clear."

"Officer Belavsky can recognize the change in his behavior, understand that he might be indicating on something, go with the dog and eventually get to the source," said training director Sgt. Randy Brenner.

Known as "Vapor Wake" dogs, Ellis and Raychel are part of a highly skilled canine unit in the NYPD Transit Bureau, taking policing to a much higher level.

"We need a dog that is not affected by all the different environmental factors," said Sgt. Brenner. "Just focuses on the work and what they have to do."

Sgt. Brenner, with his explosive detection canine "Shaunie", is the unit's training director.

"They are trained on different components, different odors that would be in an explosive device," he said.

Unlike Shaunie, trained to detect explosives in stationary objects like a bag on the platform, Raychel, the Vapor Wake, works through crowds.

"We are pretty much there to read what she is picking up on," said canine officer Horatio Maldonado. "Are you surprised what she is able to detect?," we asked. "I have been with her for six years and to this day it is amazing that she can find somebody in a crowd," he said.

The unit works in teams and now utilizes a mobile kennel base, complete with a water source, air conditioned compartments and tools to make it self-sustaining.

"It is absolutely crucial to have a canine vehicle equipped to service the dogs we use on patrol," said Sgt. Brenner.

And when they aren't working, the dogs are training to counter any possible threat.