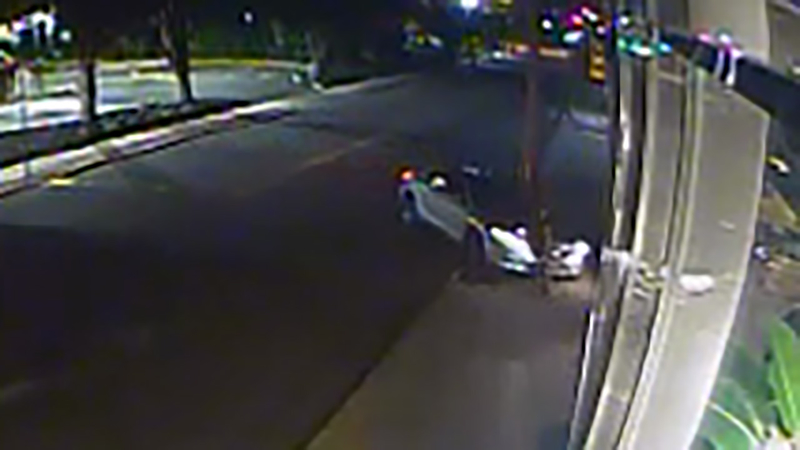 ENGLEWOOD, New Jersey (WABC) -- Police in New Jersey say a man purposefully hit an 18-year-old woman he did not know with his car, and the disturbing incident was captured on camera.

It happened around 11 p.m. on October 17, as the victim was walking home from work on East Englewood Avenue, just west of Grand Avenue, in Englewood.

The video shows a car purportedly being driven by 30-year-old Jonathan Hintze stop briefly before veering across the street and into the victim as she walked on the sidewalk.

She was sent tumbling over the hood, ending up on her back before bouncing back to her feet. She scrambled away from the car, which then fled the scene.

The victim made it back to her home, which was relatively close to the accident scene, and called police. Officers responded, and the woman was transported to a local hospital to be treated for back and leg injuries.

Englewood detectives located several small parts of the suspect vehicle's front end and recovered the accident footage. They determined that the suspect vehicle was a 2008-2012 Honda Accord, and with the assistance of New Jersey's Motor Vehicle Services, they identified similar vehicles registered in the area.

About a week later, detectives located the suspect vehicle parked on a street in Leonia. With the assistance of Leonia police, the registered owner -- Hintze -- was located and later charged in connection with the hit and run.

Authorities determined the victim and Hintze do not know each other, and the motive for the assault remains unknown.

The investigation is ongoing, and more charges are expected.

Anyone with information is urged to contact the Criminal Investigations Division at 201-568-4875.