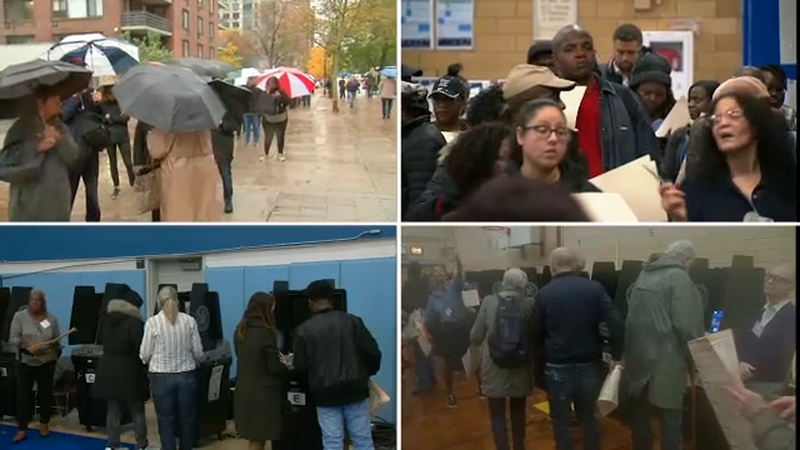 "Complaints of only one of four scanners working at PS 208 in my district," Brooklyn Councilman Jumaane Williams tweeted early this morning.

The problems continued into the evening from Brooklyn to the Bronx.

@abc7ny #ElectionDay @msnbc @CNN @donlemon @KateBolduan @andersoncooper @BarackObama @DemGovs @democracynow
ALL OF OUR MACHINES ARE DOWN at p2 168 Walter j school in the Bronx. They are making us put all of our ballots into an emergency box. pic.twitter.com/xN0gv4Rd4g

RELATED: Where to vote, polling hours and more

Some reported hours-long waits to vote because of the problems.

One voter called Eyewitness News to report problems at District 30 in Woodside, Queens, saying, "This place is a zoo" with only 2 out of 7 machines working.

Another voter tweeted us from P.S. 22 in Brooklyn to report malfunctioning scanners.

ALL SCANNERS ARE BROKEN AT PS 22. They just announced that they will be collecting ballots in an emergency collection box to scan later. People are very skeptical. Totally unacceptable. Who should I contact?! #ElectionDay @NYCVotes

So what was the deal?

Officials tell Eyewitness News that wet hands and clothing due to rain made the ballots damp, causing them to jam in the machines. Dry, crisp ballots are better to run through the machines. Additionally, the city's first two-page ballot doubled the possibility for ballot jams.

Board of Elections Executive Director Mike Ryan pointed to the weather as being a factor in some of the issues, but he said it was not the problem city wide. He is blaming the high voter turnout and the two-page ballot.
EMBED More News Videos

Danielle Leigh reports on what the head of the Board of Elections had to say about the polling complaints.

He said the two page ballot is in four of the five boroughs, with Staten Island being the exception. And he said there were little to no problems in that borough. He said they'd assess the machines after Election Day to see what changes need to be made.

"It's clear the Board of Elections wasn't prepared for one of the most important elections of our lifetimes," he wrote on Facebook. "The BOE unquestionably needs reform, top to bottom. To any New Yorker experiencing delays or difficulties at the polls, I urge you to stay in line. Your voice and your vote matter. If you're at your polling place by 9 PM you will be able to vote."

Eyewitness News reporter Stacey Sager went to four locations where problems made for a hectic morning for voters and poll workers. The good news is that repairs had been made at all four locations.

In Springfield Gardens, PS 181 poll worker Yvette Small said "It felt like an eternity" when 2 of their 6 scanners went down. It took a couple of hours for BOE to fix.

At another voting location in Woodside, only 2 out of 7 scanners working at St.Sebastian School, but that was fixed by 9:30. Most of their issues were due to voter error - improper tearing of the 2-page ballot missing the perforated edges, and then the paper wouldn't load properly into the scanners.

The line was about 30 minutes at Florence Smith Community Center in Corona, where only 1 of their 3 scanners was working.

Workers at Briarwood, P.S. 117 workers say the paper ballots just weren't "dropping" after they were scanned. Voters were crowding the location and getting angry, so one poll worker fixed the machines himself, as opposed to waiting for BOE to show up.

"It was overwhelming, it was super crowded," Marvin Campbell said. Asked how people were behaving, he told us, "A little iffy, touchy, mouthy...it was just hard to control some adults when they get a little moody...So I did what I had to do."

A couple of people got so discouraged, they left.

A similar situation happened in Greenpoint, where Eugene Resnick also reported only one working machine.

Apparently only ONE MACHINE is working here in north #Greenpoint! The others broke down. Over 100 people waiting in line @BOENYC, this is ridiculous! Cc. @BPEricAdams @NYCMayorsOffice @StephenLevin33 @RepMaloney #ElectionDay pic.twitter.com/kT0o2sFyYT

He shared this photo one hour later.

After he finally voted, he reported a line of 100 people deep OUTSIDE the polling place.

Even where polling problems did not exist, long lines -- some going out the door -- could be found. Voters at one location on the Upper West Side waited up to 40 minutes just to get inside.
EMBED More News Videos

NJ Burkett reports on the voting lines on the Upper West Side.

The New York Attorney General's office says it received hundreds of calls and emails. Not surprisingly, the number one complaint was broken scanners.