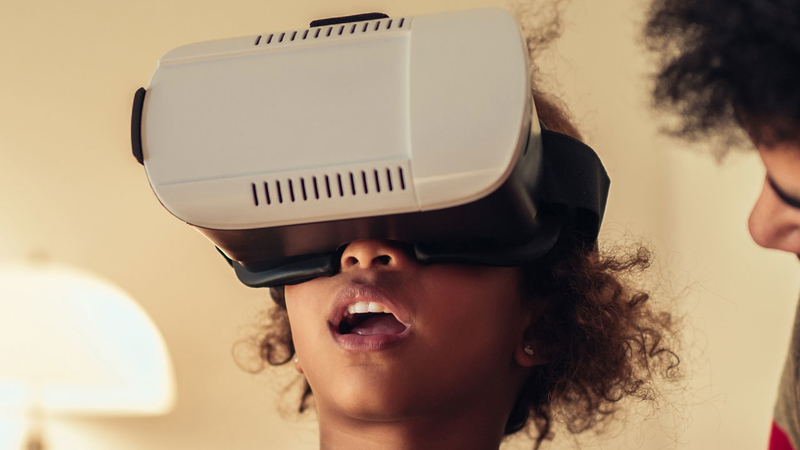 NEW YORK (WABC) -- A revolution in entertainment is happening thanks to virtual reality.

The industry doubled in size over the past year and could be worth as much as $40 billion by 2022 -- and building a brave, new world of virtual reality has become big business in New York City.

At the recent Tribeca Film Festival, a vast room was devoted to VR, where I put on a headset and went swimming with the sharks, virtually speaking.

This "Virtual Arcade" demonstrated "the future, the potential of VR," said Jim Steyer, the head of Common Sense Media, a non-profit group that works to help parents determine what is appropriate for their children to watch.

But Steyer also sees pitfalls amid all this promise.

"It could go awry if there's way too much violent content or pornographic content that comes to dominate the VR market."

Common Sense Media just finished the first-ever study about the impact of VR on children, and what the group found was disturbing.

"When virtual reality is mixed with violent video games, it's even more likely to encourage aggression in the user because you're just part of the experience," Steyer said.

Only one in every five American homes has this technology, but it's poised for further growth.

"I think it's so cool the idea of being able to step into a different reality and choose and do anything you want," he said.

His older brother Linus wants to get a VR unit as well, but their mom, Christina Daub, isn't buying it.

"It's hard enough for me to get them to come to dinner or do their homework with the games they do already play on line, so this would make it a hundred times worse," she said.

She is right to be cautious, Steyer said, and he has some simple advice for all parents.

"Our Common Sense advice about VR is, go slow, check it out for yourself, do your homework. Take your time, and try it out yourself," he said.

His study showed a danger of tripping and falling while wearing the headset and some evidence of eyestrain and headaches caused by a few hours of continuous use.

Weigh in those risks as you learn more about the rewards.

Meanwhile, the cost of the units keeps dropping, and Apple is reportedly working on a new kind of VR headset: wireless, smaller than existing units with a much higher resolution than what's currently available.