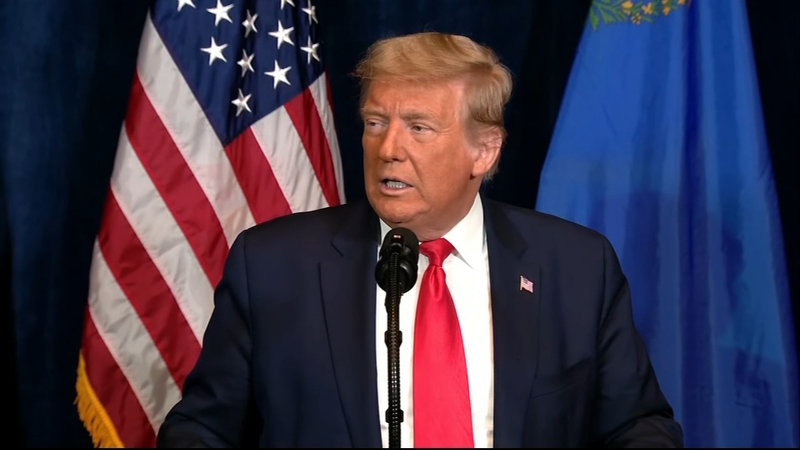 PHILADELPHIA -- The candidates in the 2020 presidential race responded to reporters' questions on Wednesday concerning the fatal police shooting of Walter Wallace Jr. and the civil unrest that followed in Philadelphia.

President Donald Trump said the federal government is looking into the shooting, which he called a "terrible event" and "if asked to go in to help, we will do that."

Former Vice President Joe Biden promised to study ways to prevent such shootings if elected president and denounced the looting in the city, repeating the calls from Wallace Jr.'s father to stop the violence.

Days before the election, President Trump and former Vice President Biden are responding to the fatal police shooting and civil unrest in Philadelphia.

Wallace, 27, a Black man, was fatally shot by police Monday after authorities say he ignored orders to drop a knife. But his family's lawyer said the family had called 911 hoping for an ambulance to help him with a mental health crisis. The shooting set off two days of protests and looting, and some rioters threw debris at officers, injuring two, according to police.

A second night of unrest broke out in the City of Philadelphia following the police shooting death of Walter Wallace Jr.

Speaking to reporters from Las Vegas on Wednesday, Trump said he knows the police very well in Philadelphia and "they should be able to handle" the looting that has emerged in the aftermath of Wallace's death.

"It shouldn't be allowed. That's no way to do it. You got to have law and order. You have to have respect for our police," Trump said.

Trump said the state should bring in its National Guard. The Guard is set to arrive in Philadelphia either Friday or Saturday.

He said his administration would help Philadelphia and would be ready to go into the city within one hour if they receive a call.

The riots in Philadelphia are the most recent consequence of the Liberal Democrats' war against the police. Law enforcement is an incredibly dangerous occupation, and thousands of officers have given their lives in the line of duty. All lethal force incidents must be fully investigated. The facts must be followed wherever they lead to ensure fair and just results. In America, we resolve conflicts through the courts and the justice system. We can never allow mob rule. The Trump Administration stands proudly with law enforcement, and stands ready, upon request, to deploy any and all Federal resources to end these riots.

The mother of Walter Wallace Jr. said Tuesday that she pleaded with police officers before they shot and killed her son.

Speaking to reporters in Wilmington, Delaware, after voting on Wednesday, Biden said that "there is no excuse whatsoever for the looting and the violence" that's broken out in Philadelphia in response to the shooting, but he said protesting overall is "totally legitimate."

Biden said he'll be setting up a commission if elected president to study "how you diminish the prospect of lethal shootings in circumstances like the one we saw." Biden's criminal justice plan would increase oversight of police departments and offer funds to support police reforms at the local level.

Our hearts are broken for the family of Walter Wallace Jr., and for all those suffering the emotional weight of learning about another Black life in America lost. Walter's life mattered.

Biden offered the comments after voting early at a government building in downtown Wilmington. Delaware allows residents to vote early by appointment, and he and his wife Jill voted together. President Trump voted on Saturday in Florida.