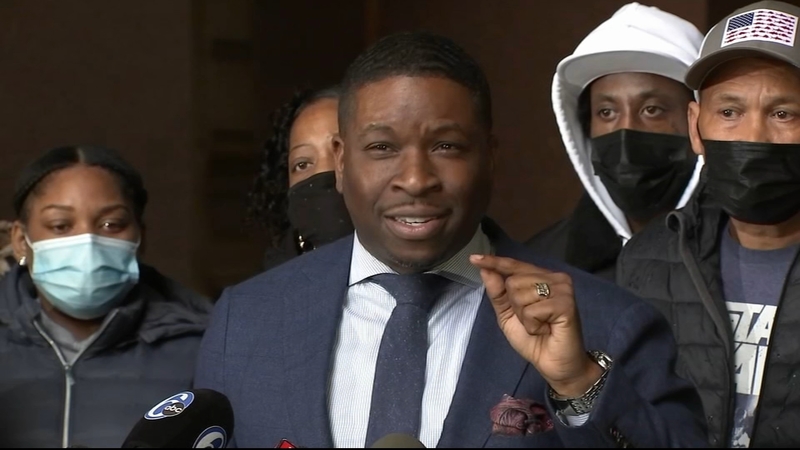 PHILADELPHIA -- The family of Walter Wallace Jr. is not calling for the Philadelphia police officers who fatally shot him to be charged with murder, family attorney Shaka Johnson told reporters on Thursday.

"And here's why, here's why: they were improperly trained and did not have the proper equipment by which to effectuate their job," Johnson said.

The comments came after the family watched body camera footage of the moments leading up to Wallace's death, which Johnson said shows him in an "obvious mental health crisis."

The footage, which is about 30-40 seconds long, shows Wallace emerging from a house with a knife as family members shout about his mental condition, he said.

Johnson also claims the video shows Wallace was incapacitated after the first shot.

Attorney for Walter Wallace Jr.'s family held a press conference on October 29, 2020 after reviewing bodycam of the fatal police shooting.

In a joint statement, the offices of Mayor Jim Kenney and District Attorney Larry Krasner expect the footage and 911 audio files to be released by the end of next week after certain matters are resolved with the Wallace family.

But the family and their attorney said they want the video to be made public.

"We hoped that it would have been released by now," Johnson said.

"This mayor, he's a coward. Any kind of man for the people, he would come down here... come down here and talk to you. That ain't his kid. He don't got to bury nobody. He don't know what pain and suffering is," Wallace Sr. said.

Officers were called to the home near 61st and Locust earlier in the day Monday and came back that afternoon when the shooting happened.

Philadelphia police union president John McNesby hasn't seen the body camera footage yet, but said based off of cell phone video, he believes Wallace lunged at the officers.

"I mean there's not much to this, Wallace had a knife, he was lunging at the officers and, unfortunately, they had to fire." said McNesby.

The family and the lawyer disagree.

"I wouldn't wish this on no one's child at all...I pray things change," Brant said. "I pray that one day we all come together and get along, cause this gotta stop, it really gotta stop."

The father of Walter Wallace Jr. says he wants justice in his son's death.

At least 14 shots were fired, police said, with at least seven from each officer.

"None of the 14 shots were necessary, but if you were going to shoot, the first shot incapacitated the man. There were 13 shots to follow, which is why he is no longer with us," said Johnson.

Video shows officers yelling 'put the knife down' before fatal shooting of Walter Wallace on October 26, 2020.

Philadelphia Police Commissioner Danielle Outlaw said it was important that Wallace's family see the evidence, including body camera video before it was released to the public.

"I have every intention of being transparent and releasing the footage. I think the footage can speak for itself," Outlaw said.

Cell phone video captured Wallace Jr.'s altercation with officers before he was killed.

The video does not make it clear whether he was in fact holding a knife, but witnesses and the family attorney confirm he was.

"I understand he had a knife...and I think that does not give you carte blanche to execute a man," said Johnson.

Police officials said they could not confirm what information had been given to the responding officers, whether they were told about a possible mental illness or how many calls they had received for help at Wallace's address Monday.

Outlaw said earlier the officers involved in the shooting were taken off street duty as they investigate. She said the officers' names and other identifying information, including their race, would be withheld until the department could be sure releasing the information would not pose a threat to their safety.

Neither had a Taser or similar device at the time of the shooting, Outlaw said, noting the department had previously asked for funding to equip more officers with those devices.

Johnson said the city has failed the Wallace family, the community and its police officers.

"The city has failed, not only the Wallace family, not only the other members of that community, who will be scarred and traumatized for the remainder of their days, but the city has also failed those police officers, it failed them tremendously. The only remedy the police had, in that moment per their thinking, was their service weapon. There was no less lethal action available. And that has been our war cry ever since Tuesday," said Johnson.

Wallace's killing spawned nights of unrest in the City of Philadelphia.

Unlike Wednesday night, there was no citywide curfew on Thursday evening.

The mayor and police commissioner urged all residents to remain home unless travel was absolutely necessary, such as for work.

Around 9 p.m., Philadelphia's Office of Emergency Management tweeted that there were street closures in effect: from 8th Street to 20th Street and from Arch Street to Walnut Street. Residents and essential employees could get in the area by showing ID. The streets reopened just before 4 a.m. Friday.

The Pennsylvania National Guard arrived in Philadelphia on Friday morning. They will be working with local agencies to identify the greatest need.

Video shows a police officer being dragged by vehicle after looters ransack a Philadelphia furniture store on October 27, 2020.

No significant issues were reported Thursday night in regards to looting, as there were earlier in the week.

Since Monday, there have been a total of 212 arrests.

Fifty-seven officers have been injured since the unrest. Only one officer remains hospitalized at this time.

PRESS BRIEFING: On October 28, 2020, city officials provided an update on the shooting of Walter Wallace Jr. and the civil unrest that followed.

The family said a funeral will be held for Wallace on Nov. 7 at the Church of Christian Compassion.