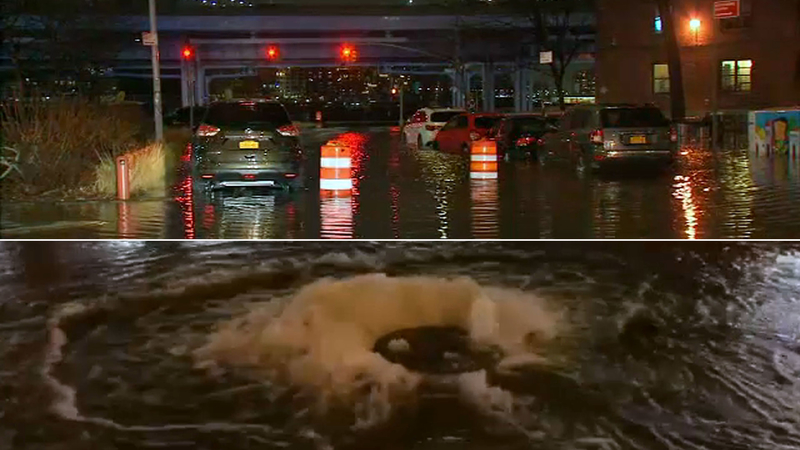 LOWER EAST SIDE, Manhattan (WABC) -- The water has receded and cleanup work is underway on Manhattan's Lower East Side after a massive water main break forced street closures near FDR Drive.

The break happened on South Street near Pike Slip during the Monday afternoon rush hour.

A torrent of drinking water from a 30-inch main surged quickly down South Street between the Brooklyn and Manhattan Bridges, taking construction equipment with it.

🚨 💦 Another massive water main break floods #nyc streets — this time on the Lower East Side. The water’s cleaned up, but street closures continue this morning. #abc7NY https://t.co/IRClnU69Jf pic.twitter.com/sB4pLs6Gde

A nearby construction project delayed emergency workers' access to the scene and delaying access to a key shutoff valve.

About 30 parked cars were damaged before crews were able to shut the water off and the water began to recede.

South Street remained closed in both directions Tuesday from Pike Slip to Robert F. Wagner Place due to the cleanup.

Southbound Catherine Slip was also shut down between South Street and Madison Street.

This was the city's third major water main break in the last month, and officials said thankfully in this case, redundant underground pipes meant nobody lost water.

"Breaks happen wherever, and we deal with them as best we can," DEP Commissioner Vincent Sapienza said. "Fortunately, none of the residences in the area were impacted, businesses kept operating. So that was the one plus."

The ruptured main dates back to the 1950s. There are many others underground that are decades older than that.