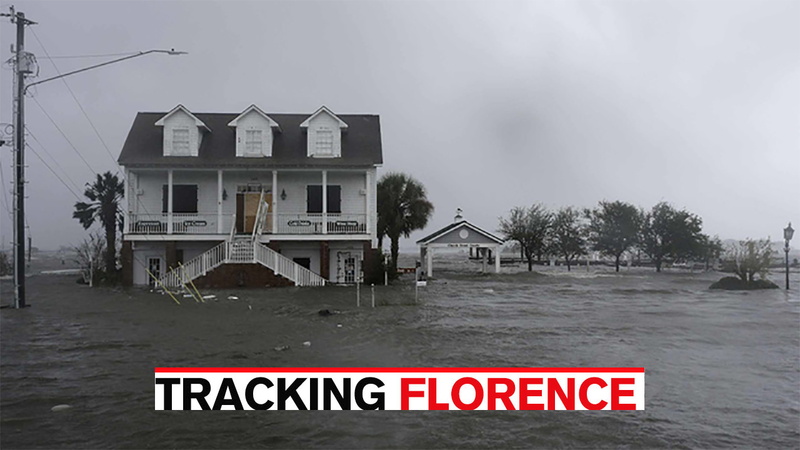 Florence is over land and headed north, packing a lot of rain

NEW YORK (WABC) -- Florence, now a tropical depression, is moving slowly and it continues to produce "catastrophic flooding" over North and South Carolina and now into Western Virginia.

The storm made landfall as a Category 1 Hurricane around 7:30 a.m. Friday in Wrightsville Beach, North Carolina with 90 mph winds. The storm's winds have decreased to 35 mph with higher gusts in heavy rain bands.

As of 5 a.m. Monday, the center of the storm was about 125 miles West Southwest of Roanoke, Virginia. Sustained winds were at 30 mph as the storm moved at 13 mph.

Leftover rain from Florence will make its way to the New York City area by Tuesday.
EMBED More News Videos

ABC's Marci Gonzalez has the latest on Florence as it continues to move across the Carolinas.

Rivers swelled toward record levels, forecasters said, and thousands of people were ordered to evacuate for fear that the next few days could bring the most destructive round of flooding in North Carolina history.

The water has the potential to reach 2 to 5 feet along the coast from areas near the Pamlico Sound extending as far south as Myrtle Beach. Large destructive waves will accompany the surges along the coast.

Florence continues to produce heavy and excessive rain as it moves through the Carolinas.

Newport, North Carolina reported a rainfall total over 25 inches as of 11:00 p.m.Saturday.

Swansboro, North Carolina, received more than 30 inches of rain, breaking a record that was last set in 1999 (24 inches) when Hurricane Floyd hit the state.

After Hurricane Florence came through, Stuart Edwards went to assess the damage near the Pamlico River.

Totals between 30 and 40 inches are expected along the North Carolina coastal areas south of Cape Hatteras. Parts of North and South Carolina may see 10 to 15 more inches of rain. This rainfall will produce both flash flooding and prolonged river flooding.

West-central Virginia into far eastern West Virginia will see less rainfall -- 3 to 6 inches -- but this could also produce flash flooding and landslides.

WEATHER UPDATES ON THE GO: Download the AccuWeather app!

It appeared that the north side of the eye was the most dangerous place to be as Florence moved ashore. A gust of 105 mph was recorded at Wilmington airport, surpassing the power of Hurricane Fran two decades ago.

Swells generated by Florence are affecting Bermuda and portions of the East Coast, cause life-threatening surf and rip current conditions.

About 740,000 homes and businesses remained without power in the Carolinas Sunday, and utilities said some could be out for weeks.

RELATED FROM ABC NEWS: What to expect and when from Hurricane Florence

1. Flash flood warnings are currently in effect across a large portion of southern and western North Carolina, portions of far northeast South Carolina and southwest Virginia.

---
With information from AccuWeather, the National Hurricane Center and the Associated Press