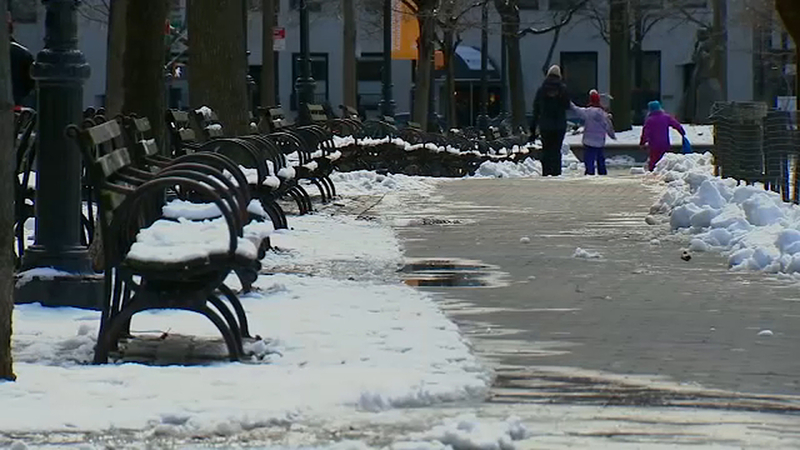 NEW YORK (WABC) -- New York City public schools were closed Monday because of the winter storm that turned the city streets into a slushy mess.

Mayor Bill de Blasio said he doesn't regret the decision to keep students home despite criticism, after the storm was not as severe as some had feared.

The mayor said it was out of an abundance of safety, and that most forecasts suggested kids would have a tough time getting to school.

"We have to make decisions based on information we have," said de Blasio. "If we think we're seeing a clear picture, then it's important to let parents know as quickly as possible. I was a public school parent and I'll tell you, parents need that information the first available option."

The mayor said he thought the storm would be worse when school buses were arriving to pick up kids.

New York City issued a Hazardous Travel Advisory that will be in effect through Monday.
RELATED: School closings and delays for the Tri-State area

City officials were concerned that conditions could be hazardous for the Monday morning commute, and advised commuters to take mass transit instead of driving if possible.

Yet it seemed that for most of the city, there was less snow and more slush to contend with for the commuting hours.

We put safety first when we make a call on closing school. The overnight storm had more rain and less snow than forecasted. We know it’s tough for working parents — that’s why we made an early decision so New Yorkers could plan.

Kids, enjoy your day off. Back to school Tuesday.

The city Sanitation Department says it had over 1,600 plows and nearly 700 salt spreaders out for the storm.

Alternate side parking regulations have been suspended for Monday and Tuesday to facilitate snow removal.
The city's tow truck task force was activated to keep vehicles from blocking roads.