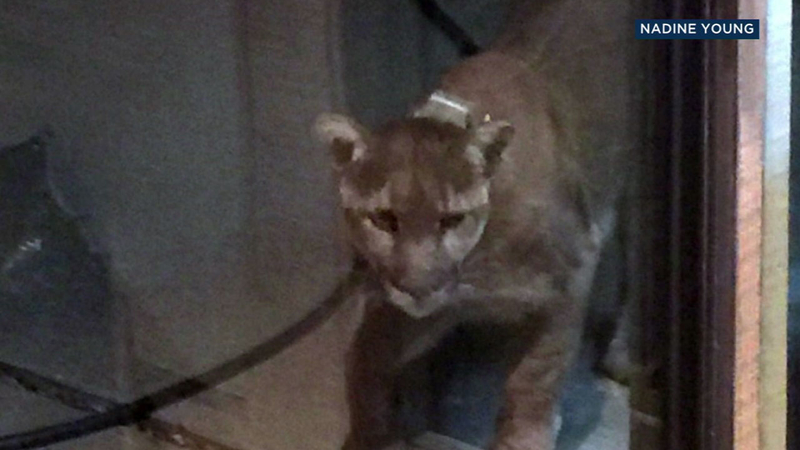 WESTLAKE VILLAGE, California -- A Westlake Village, California, family recalls the terrifying moment a mountain lion tried to get into their home through a back door.

"It was kind of scary because he was kind of not wanting to leave and he charged into the window, what? Four times?" Sammy Kerr-Jarrett said.

Sammy, 8, and his mother Nadine Young were stunned when the wild cat suddenly appeared on their back patio of their home Sunday night.

"He was going to put the dog out and he freaked out and said, 'Mommy, mommy, mommy, there's a puma! There's a puma!'" Nadine said. "I had no idea what he was talking about. I'd never seen one before. I went to the door and low and behold there's a huge mountain lion right there, trying to get in."

They said the mountain lion was laser focused on Daisy, their 14-year-old Jack Russell terrier. The big cat tried desperately to get inside.

"He charged four times at the door. It was terrifying. Absolutely terrifying," Nadine said.

She said after several attempts the animal finally gave up and disappeared in the dark. The animal, which appeared to be tagged, is no stranger to the neighborhood.

Several residents reported losing pets and sightings of the wild animal. But the close call with Nadine and her son was too much. The mother of two is now terrified her young children could be in danger if they are outside playing and the mountain lion returns.

"I would like to see this animal relocated because I've heard from lots of other neighbors that he's been killing animals, all of our neighbors' animals. He's definitely way more brazen in his behavior. He was not scared of us whatsoever," Nadine said.

She added that she called California Fish and Wildlife and spoke to a warden who said that the agency will be investigating the incident.