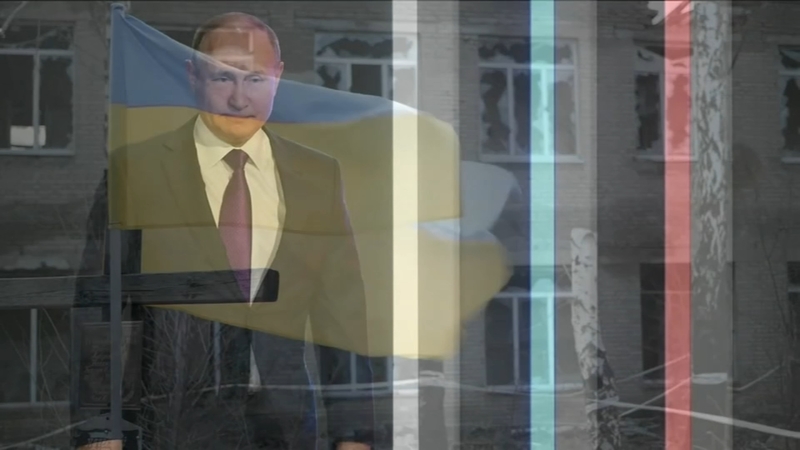 CHICAGO -- As Russian forces invade his home country of Ukraine, Northwestern University professor Yohann Petrovsky-Shtern worries about his family back home. They have all taken shelter including his 88-year-old mother.

Many in the West are mystified by Russian President Vladimir Putin's assault on Ukraine, and while the two countries share a complex history Petrovsky-Shtern said the reasoning behind it is quite simple.

READ MORE: Russia invades Ukraine on many fronts in 'brutal act of war'

"One sovereign Democratic country wants to be part of Europe, and another autocratic regime doesn't want to see it there," he said.

Petrovsky-Shtern said Putin is trying to rewrite the end of the Cold War, which lasted between the then-Union Soviet Socialist Republics, or USSR, and the United Sates from 1945 to 1990.

"Many republics of the former Soviet Union declared their independence, and the Russian Federation acknowledged that independence," Petrovsky-Shtern said. "Corresponding documents were signed."

In 1991, a large percentage of the Ukrainian people voted to become independent of Russia.

"But Ukraine's independent culture and language goes back for centuries," Petrovsky-Shtern explained. "You had nationalist movements in the Ukraine in the 1800s against the czars."

Elizabeth Shackelford with the Chicago Council of Global Affairs said Putin is choosing to ignore hundreds of years of independent Ukraine history. The question is, will the Russian population and Putin's oligarchs do the same?'

"Are they up with this nationalist view, is it worth a costly painful war with this neighbor to maintain that false sense of history?" she asked.

Some fear that if Putin succeeds, what would stop him from invading other countries from the former Soviet bloc? For Americans wondering why they should care about a conflict an ocean away, experts said this type of instability in a globalized world will have a ripple effect on all of us.
Report a correction or typo
Related topics:
politicsvladimir putinrussiaukrainehistoryu.s. & world
Copyright © 2022 WLS-TV. All Rights Reserved.
UKRAINE
Britain: Russian troops likely to redeploy from Mariupol
Red Cross registers hundreds of Ukrainian POWs from Mariupol
Actor Liev Schreiber hosts event in D.C. to raise money for Ukraine
Interrogation, uncertainty for soldiers abandoning Mariupol
TOP STORIES
Queens neighborhood on edge after recent attacks on Sikh community
Four cases of Legionnaires' disease reported in Bronx neighborhood
Heat Advisory issued ahead of possible record-breaking temperatures
Silver Alert issued for missing Long Island couple with dementia
Why a NJ teacher keeps an empty chair in his classroom
Organization connects mental health with mentorship for AAPI youth
2 window washers rescued from scaffolding 42 stories up in Midtown
Show More
'Social Emotional Learning Day': Pandemic puts focus on mental health
Man graduates Fordham 66 years after freshman year
15-year-old arrested in stray bullet death of 11-year-old Kyahara Tay
Baby formula scams are skyrocketing: How to avoid getting duped
9-week-old cockapoo puppy stolen from pet shop in NJ
More TOP STORIES News