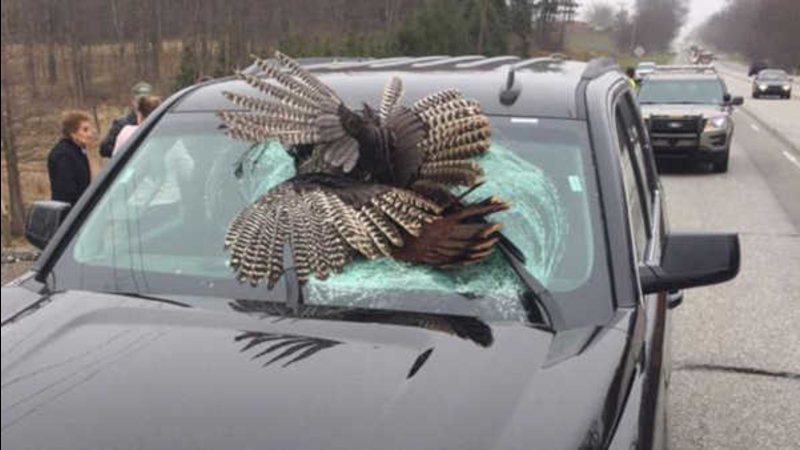 EMERSON, New Jersey (WABC) -- It was a driver's nightmare! Before John Tarabocchia knew it, a 300-pound turkey came crashing through the windshield.

"I thought he would go over the roof of the car - instead he went right into the windshield," said Driver John Tarabocchia.

John, with his son Ian in the passenger seat and his wife Corina, and her mother, Maria in the back seat, then wrestled his rental car to the side of Route 20 in La Porte County, Indiana.

Turkey surprise! This vehicle struck a wild turkey on US 20 near Wilhelm Road this morning. pic.twitter.com/vs2TqdCBGQ

"The rear-view mirror broke off, so I looked at the side mirrors. I got over one lane, and finally pulled over to the side. There were some other vehicles on the other lane that pulled a u-turn and came over and assisted us," adds John.

"Four wild turkeys were flying across the roadway and this vehicle, the westbound vehicle struck the fourth one in this small flock," said Captain Michael Kellems.

John and his family, from Emerson, New Jersey tell Eyewitness News they were making the 120-mile trip from South Bend to the airport in Chicago. They had spent the weekend at University of Notre Dame, where his daughter Riana has been accepted. They were about 40 miles into the trip when the large turkey suddenly flew up in front of them.

"Hats off to Mr. Tarabocchia. He was able to keep that car under control and pulled off the side of the road without contacting any other cars," Captain Kellems adds.

John said if he had veered right or left, he would have lost control of the vehicle.

Back home after a very long day, John and his family are tired, a bit shaken, but are most thankful everyone is safe and sound.