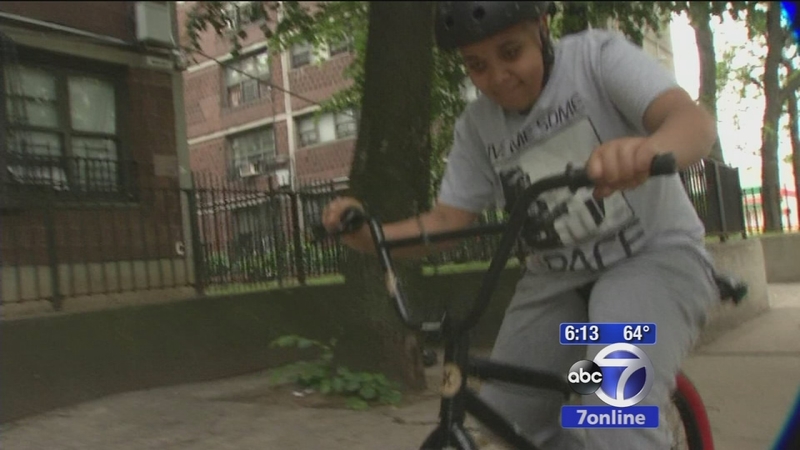 WILLIAMSBURG (WABC) -- UPDATE: Lucy Yang has heard from DJ's grandmother, who said an anonymous donor dropped off a new helmet and bike on Saturday. Another lady contacted her and said she already bought a bike and helmet, and wouldn't take no for an answer. The grandmother said she will give it to DJ's brother. She says she does NOT want any more gifts, and if someone comes forward, she will give it to another needy child (plenty in her neighborhood.) She thanks Eyewitness News viewers for their big hearts.

A trip to the park turned into an ugly mugging when a gentle 11-year-old boy was beaten for his bike. He has suffered so much already and now this.

"They took it, then hit me with a stick on my face," said Dell Jones, the robbery victim.

11-year-old Dell Jones, they call him DJ, finally got to ride his Christmas gift on the first nice day this month; a brand new black and gold BMX bike.

Only, he didn't get very far at Lindsey Park in Williamsburg.

He says two men approached him, and without warning, hit him on the side of the head with a metal rod and stole his beautiful bike.

"I was really mad about the bruise because if you're going to rob someone, take what you can but don't hurt them," said Mary McCullen, DJ's grandmother.

Worse yet, we're told they came back seconds later and grabbed his helmet too. They ripped it right off his head.

Mary, who is his grandmother and guardian, scraped together $400 for the bike. She wanted to give him something special.

DJ is an orphan. His father died of cancer. His mother died shortly after from a heart attack.

DJ also has autism. This 5th grader is used to kids being cruel to him, but he was not prepared for a beating and robbery at the playground.

The bruises on his face are healing as he now spends his afternoons playing inside.

"Things getting so bad can't even go outside," McCullen said.

"I was riding around the park," Jones said.

Police believe the two robbers were 20 and 14 years old.

DJ says they looked alike, as if related.