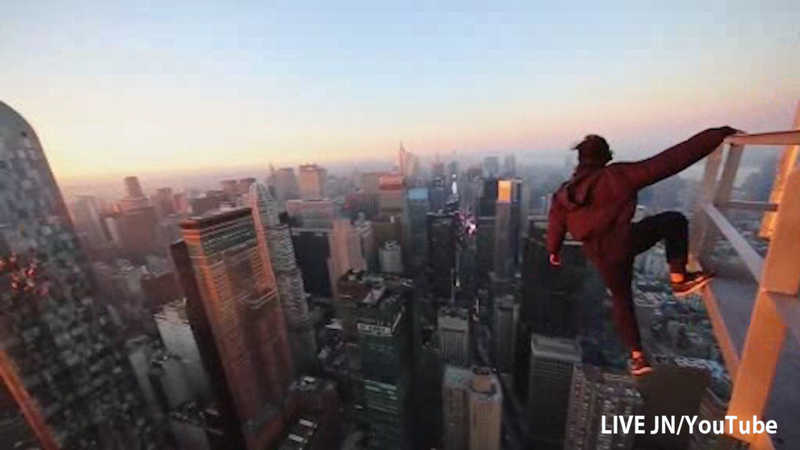 WEEKHAWKEN, New Jersey (WABC) -- The New Jersey teen who has posted videos over the past month showing him scaling skyscrapers across New York City surrendered to detectives Friday.

It had been thought 18-year-old Justin Casquejo would receive a desk appearance ticket for his most recent exploits and would have to appear in court at a later date, but authorities said he is going to face felony charges of reckless endangerment and trespassing.

Still, his lawyer argues he meant no harm.

"This is not an individual that I have seen in any capacity, that is a menace, is malicious, that is intentionally going out and perpetrating anything criminal," attorney Jeremy Soland said. "There is nothing that I have seen since I've gotten to know him that says that he's a cavalier, flippant person. He has nothing but the complete amount of respect anyone can have for first responders and law enforcement."

Videos posted on YouTube showed dozens of new climbs at secure locations all across Manhattan.

Hanging by one arm, Casquejo was dangerously perched dozens of stories high above Central Park in what appears to be his latest stunt.

"You guys don't know how beautiful this is," he said in the video.

Casquejo and a companion appear to make their way into the construction site of a building on Central Park South and climb up through the rigging of crane at the top. With camera in hand, Casquejo documents the dangerous stunt.

"The problem is he's thousands of feet in the air and you can't tempt gravity too many times and survive," former NYPD detective Joe Giacalone said.

Giacalone sees stunts of this nature being fueled by social media and believes it puts this young man's life in danger and others who might have to rescue him.

"You have to put them at risk for having to rescue this kid," he said. "And the second thing is, while they're doing this, there could be another emergency they couldn't get to. So this affects the whole city."