WABC
Of the 10 deadliest shootings in the U.S., five have taken place in the past three years.

Here's a look at some of the nation's deadliest mass shootings since 2012:

- Aug. 31, 2019: Five people were killed in West Texas in shootings in the area of Midland and Odessa.

- Aug 4, 2019: 9 people were killed and 28 were injured during a mass shooting on the streets of the Oregon District in Dayton, Ohio.

- Aug. 3, 2019: 20 people were killed and dozens more injured in a shooting at a shopping mall on a Saturday afternoon in El Paso, Texas.

- Feb. 15, 2019: 5 employees, including an intern, were killed in a workplace mass shooting in Aurora, Illinois.

- Nov. 19, 2018: 4 people were killed in Southwest Philadelphia in a drug-related shooting

- Nov. 7, 2018: 12 people were killed when a gunman opened fire inside a nightclub in Thousand Oaks, California, near Los Angeles.

- Oct. 27, 2018: 11 people were killed, seven were injured when Robert Bowers opened fire during Shabbat services at the Tree of Life synagogue in the Squirrel Hill neighborhood of Pittsburgh.

- Jun. 28, 2018: A shooting at the Capital Gazette newspaper in Annapolis, Maryland, killed five employees after disgruntled reader Jarrod Ramos, 38, blasted his way into the newsroom with a shotgun.

- Apr. 22, 2018: A half-naked gunman fatally shot four people at a Nashville Waffle House before being tackled by 29-year-old James Shaw Jr., a restaurant patron. Travis Reinking was later arrested after a manhunt.

- Feb. 14, 2018: 17 people were killed when 19-year-old Nikolas Cruz opened fire in Marjory Stoneman Douglas High School in Parkland, Florida. The shooting also injured 17 and is the deadliest mass shooting at a U.S. high school in history.

- Oct. 1, 2017: Fifty-eight people were killed when Stephen Paddock opened fire on a crowd at the Route 91 Harvest music festival in Las Vegas from a room in the Mandalay Bay Resort and Casino.

- July 1, 2017: 28 people were hurt when someone opened fire in the Power Ultra Lounge nightclub in Little Rock, Arkansas. Police believe it may have been gang-related.

- June 30, 2017: Dr. Henry Bello, 45, entered Bronx-Lebanon Hospital Center and opened fire killing one person and injuring six others before killing himself. Dr. Bello was a former employee of the hospital and believed his former co-workers were responsible for him losing his job.

- June 14, 2017: Jimmy Lam, 38, was a UPS driver who filed grievances about overtime work with the company. He opened fire inside a San Francisco package facility, killing three people and injuring several others before killing himself.

- June 14, 2017: Six people were injured, including Rep. Steve Scalise, when James Hodgkinson, 66, opened fire on a Republican practice for a charity baseball game. Hodgkinson was killed in a shootout with police. The shooter was an outspoken opponent of President Donald Trump.

- Jan. 6, 2017: Esteban Santiago, 26, said he was working on behalf of ISIS when he opened fire in the baggage claim area of Fort Lauderdale-Hollywood International Airport. He killed five people and injured either others.

- June 11, 2016: Omar Mateen, 29, entered the Pulse nightclub in Orlando, Florida and opened fire killing 49 people and wounding 53 others with an assault-style rifle. SWAT officers responded to the shooting and killed Mateen. Mateen was an American-born man who had pledged his allegiance to ISIS.

- Feb. 25, 2016: Cedric Ford, 38, killed three people and wounded 14 others at the lawnmower factory where he worked in the central Kansas community of Hesston. The local police chief killed him during a shootout with 200 to 300 workers still in the building, authorities said.

- Feb. 20, 2016: Jason Dalton, 45, is accused of randomly shooting and killing six people and severely wounding two others during a series of attacks over several hours in the Kalamazoo, Michigan, area. Authorities say he paused between shootings to make money as an Uber driver. He faces murder and attempted murder charges.

- Dec. 2, 2015: Syed Rizwan Farook, 28, and Tashfeen Malik, 27, opened fire at a social services center in San Bernardino, California, killing 14 people and wounding more than 20. They fled the scene but died hours later in a shootout with police.

- May 23, 2014: A community college student, Elliot Rodger, 22, killed six people and wounded 13 in shooting and stabbing attacks in the area near the University of California, Santa Barbara, campus. Authorities said he apparently shot himself to death after a gun battle with deputies.

- Sept. 16, 2013: Aaron Alexis, a mentally disturbed civilian contractor, shot 12 people to death at the Washington Navy Yard before he was killed in a police shootout.

- July 26, 2013: Pedro Vargas, 42, went on a shooting rampage at his Hialeah, Florida, apartment building, gunning down six people before officers fatally shot him.

- Dec. 14, 2012: In Newtown, Connecticut, an armed 20-year-old man entered Sandy Hook Elementary School and used a semi-automatic rifle to kill 26 people, including 20 first-graders and six adult school staff members. He then killed himself.

- Sept. 27, 2012: In Minnesota's deadliest workplace rampage, Andrew Engeldinger, who had just been fired, pulled a gun and fatally shot six people, including the company's founder. He also wounded two others at Accent Signage Systems in Minneapolis before taking his own life. 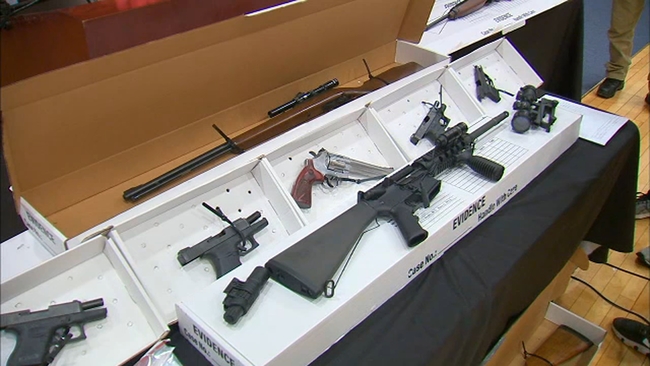