H.E.R. wins best original song for 'Fight for You'
OTRC 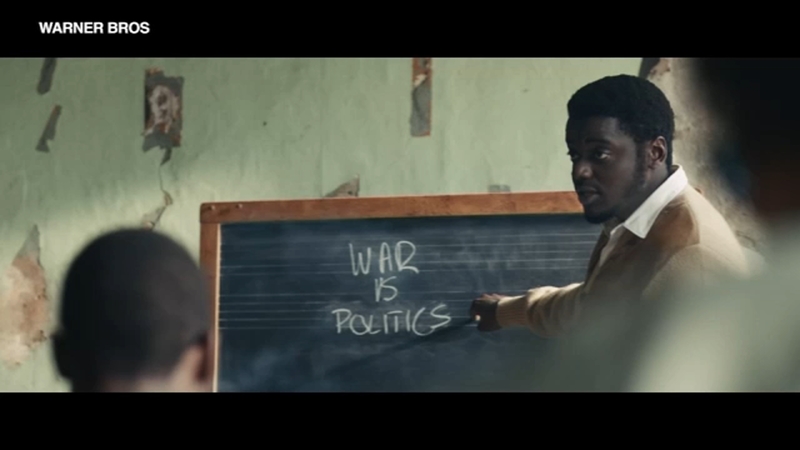 LOS ANGELES -- "Judas and the Black Messiah," directed by Shaka King, dramatizes the life and death of Fred Hampton, the former chairman of the Illinois Black Panther Party who was 21 years old when he was killed by Chicago police during a raid on his West Side apartment in 1969.

The film follows Hampton (played by Daniel Kaluuya) and William O'Neal (played by LaKeith Stanfield), the man who infiltrated the political organization at the behest of the U.S. government.

With five Oscar nominations, "Judas and the Black Messiah" has already scooped up a number of awards this season, including best supporting actor trophies at the Golden Globes, the Screen Actors Guild Awards, the Critics' Choice Awards and British Academy Film Awards for star Daniel Kaluuya.

This is Kaluuya's second Oscar nomination, his first in 2018 for his performance in the race-based horror "Get Out."

To prepare for the role, Kaluuya said he studied the history of Chicago politics to understand how the Black Panther Party fit into that space.

"To Chairman Fred Hampton, what a man. How blessed we are that we lived in a lifetime where he existed," Kaluuya said, clutching his trophy. "He was on this Earth for 21 years and he found a way to feed kids breakfast, educate kids, get free medical care against all odds."

"They showed me how to love myself," he said. "With that love, they overflowed into the Black community and into other communities. They showed us the power of unity."

"It's important to see the truth. To see these groups of people -- The Black Panther Party, how on a mission to empower their own, to love their own, to liberate their own ... and their deeds being manipulated into terrorist acts," Kaluuya said.

Kaluuya admonished his fellow nominees, saying, "There's so much work to do guys and that's on everyone in this room. This ain't no single-man job."

The 32-year-old actor was cheered by his Ugandan mother, Damalie, and his sister, who sat socially distanced in seats away from the nominees at tables.

"I'd like to thank my mom," Kaluuya said, as she teared up. "Thank you for pouring so much into me. You gave me everything. You gave me your factory settings so I could stand at my fullest height."

He was competing against co-star LaKeith Stanfield, along with Sacha Baron Cohen ("The Trial of the Chicago 7"), Leslie Odom Jr. ("One Night in Miami...") and Paul Raci ("Sound of Metal").

"I share this honor with the gift that is LaKeith Stanfield," Kaluuya said.

"Judas and the Black Messiah" producer Charles King says resurfacing the hidden stories of the past can help society find a path to move forward.

"Judas and the Black Messiah" not only retells history but made history itself: For the first time ever, one of the movies up for best picture has an all-Black producing team.

Charles King, the founder and CEO of MACRO, is one of the three producers.

After being a power agent and partner at one of Hollywood's top agencies, King decided to take a leap of faith in 2015 to pursue his vision of building MACRO, a global media brand driven by people of color in efforts to tell stories that have the power to bring communities together.

"You think so much of what's happened in the world. I was looking at the summation of the trial for our brother George Floyd and his murderer -- just thinking about how policing ties in what [Hampton] was trying to address then and how so much of that continues on even to this day," King said.

Charles said he believes resurfacing hidden stories of the past can help society find a path to move forward to "inspire and bring people together."

The Oscar for Best Original Song went to H.E.R. for her song "Fight for You."