From 'deaf and dumb' to 'octoroon': Census questions that did not meet the test of time 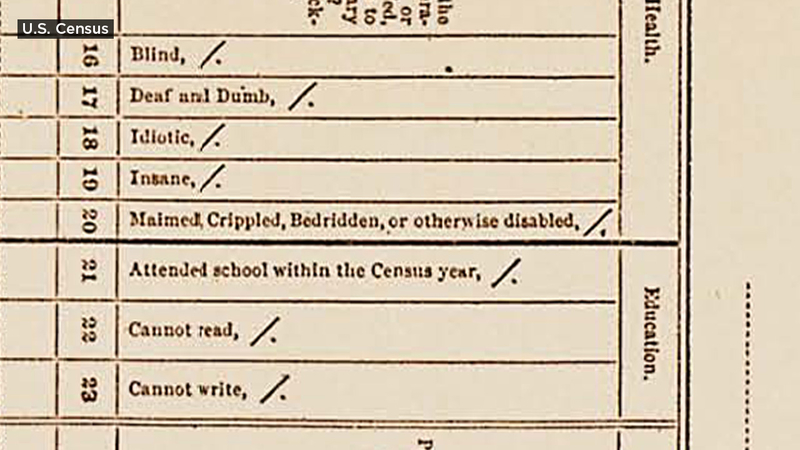 Census questions that didn't meet the test of time

SAN FRANCISCO -- The debate over the citizenship question is just the latest controversy that has surrounded the questionnaire since it began in 1790. That first census only asked if respondents were white, a free person or a slave.

RELATED: What is gerrymandering? Breaking down the impact of the Supreme Court's latest decision

Since then, the census has asked residents what we may not consider impertinent questions, such as the health section in 1880 that asked if a person was "deaf and dumb', 'insane' or 'idiotic'.

In 1890, blacks were asked to identify if they were 'quadroon', meaning they were 1/4th black, or 'octoroon' if they were 1/8th black. That was the only year that question appeared on the census.

Race was not always included in the census. Early on it was categorized as 'color'. In 1870, Chinese was the only color east Asians could select. That was not the only fail with race in the census. In 1930, Mexican was listed as a race.

SEE A LIST OF ALL THE CENSUS QUESTIONS SINCE 1790

Census data, like a library card, is a gateway to knowledge and possibility in your community. Learn more about how you can shape your future by responding to the #2020Census: https://t.co/K3jzM3Ov0B pic.twitter.com/K4qC4qhEpk

The census has evolved as American has evolved. In 1940, the census was divided into a population and housing questionnaire that collected intimate details of respondents.