Joe Girardi managed the Yankees the only way he knows 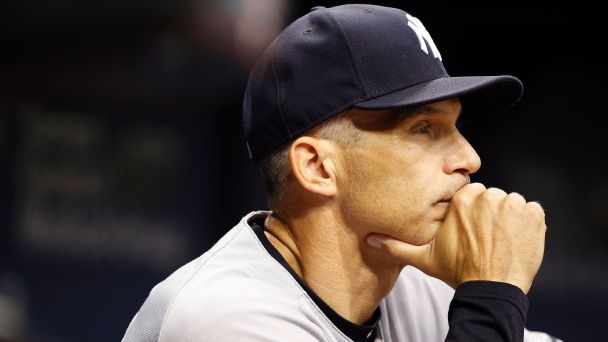 Joe Girardi stood outside his office after his final victory as manager of the New York Yankees, his state-trooper arms folded across his chest. He was up three games to two on the Houston Astros in the American League Championship Series, and I asked him how much his legacy would change if he won a championship with his young and likable team.

I asked him whether he realized he might become kinda lovable, like his predecessor Joe Torre, if he pulled off a parade with a Yankees team the rest of the country actually didn't despise.

I've been around enough coaches and athletes over 30-plus years to know when someone is giving the same answer publicly that he or she would give privately. And without a doubt, this was Joe Girardi's truth on and off the record.

He's not a charmer or a storyteller or an easy figure to hug. He's a grinder with a binder out of East Peoria, Illinois, and he believes more than anything in an honest day's work. Girardi got that from his parents, Jerry and Angie. His father was a bricklayer, electrical supplies salesman, restaurant owner and grade school coach. His mother was a school psychologist who fought a vile disease with the heart of a thousand lions.

"Diagnosed with cancer when she was 43 and given three months to live," Girardi said in March of 2010. "She lived with it six years. That's tough."

The manager was sitting at a card table in his spring training office back then, growing more emotional by the syllable. "My mom," he said with a sigh. "She died 26 years ago, and I'll always remember her last words to me before she passed. She said, 'Just don't forget me.'"

And no, he never did. Girardi grew emotional three times in my presence in his 10 years as Yankees manager -- talking about his mom, talking about his dad and thanking me for writing a story about his old man over the weekend when he died during the 2012 playoffs.

Jerry, an Air Force man in the Korean War, had been a long-suffering victim of Alzheimer's. "I saw what my father did just to feed us all," Girardi said. "The toughness I saw in my parents showed me you have to work through adversity and not let it affect what you do." Jerry once broke his thumb trying to change a spigot on a bathtub, and it ended up bleeding all over the bathroom. "But he taped it up and finished the job," Joe said. "That's what my mom did, too. She finished the job. That's what I saw every day."

Girardi was about family and work, work and family. He attacked his playing and managing careers with the same intensity with which he attacked his busboy duties at his family's restaurant, the same way he attacked wind sprints in high school football practice. As a Yankees catcher in 1996, the start of the Torre-Jeter-Rivera dynasty, he made the cover of Sports Illustrated -- closer John Wetteland was pictured jumping into his arms. Joe's boyhood friend, Jeff Giebelhausen, happened to be driving by the Girardis' home a few days later, and sure enough there was Joe breaking a sweat as he was cleaning up his old man's yard.

"Seeing him with rake in hand," Giebelhausen said, "I think Joe was enjoying that moment as much as he enjoyed winning the World Series."

The ruling Steinbrenners and general manager Brian Cashman adored Girardi's work ethic, and the GM picked the former catcher over franchise icon Don Mattingly to succeed Torre. Mattingly predicted that succeeding Torre in the Bronx would be tantamount to succeeding UCLA legend John Wooden in Westwood, and Girardi found out his runner-up wasn't wrong. Torre wasn't the greatest tactician of all time, but he majored in the human heartbeat. Nobody could ever manage the big-city noise and the relentless failure that defines the game of baseball like Joseph Paul Torre.

Torre's strength was Girardi's weakness. Yankees executives thought Girardi logged more hours than Torre and that he rightfully embraced the new-school analytics they wanted emphasized over old-school instinct. In his first year, 2008, when he failed to extend the franchise's 13-year playoff run in the final season of the old Yankee Stadium, Girardi was a tense and distant figure who had uneasy relationships with players and the media. Cashman and the team's PR man, Jason Zillo, urged him to become more user-friendly and consider some of the personality tweaks Giants coach Tom Coughlin used to move from almost-fired tyrant to embraceable Super Bowl champ.

In danger of getting himself run out of town, Girardi agreed in the spring of 2009 to loosen up. He called Zillo into his office for a 90-minute meeting and broke out a yellow legal pad filled with notes on the kinder, gentler tweaks he was prepared to make. The Yankees won the World Series that fall, and the hundreds of millions of dollars they'd spent on free agents represented the chief reason why. But Girardi's softer approach helped, and it was noticed.

Just as his failure to take additional steps along those lines was noticed.

He lost himself in his job, devoting hour after hour and day after day to the study of video and stats and tendencies. Girardi prepared more like a football coach, and, hey, he was only following Torre's instructions. After the Yankees beat the Astros in Game 5 last week, Girardi remembered the day he was offered the biggest job in the sport. "I called Joe and asked him in a sense for his blessing," Girardi said, "and he said, 'I'm going to tell you right now: You have to be yourself.' And that's what I've always tried to do. I can't be Joe Torre. My personality is different from Joe's. ... I just had to do it my way, and that's what I've tried to do."

Girardi's way was good for a Yankees record, over 10 seasons, of 200 games north of .500. He didn't win a second championship (Torre won four), but he did lead this year's team to places it wasn't expected to reach. The Yankees were supposed to be about tomorrow. They were supposed to be about Aaron Judge and Gary Sanchez and Greg Bird growing old together and starting their own dynasty in a year or two. Girardi deserves his share of credit for expediting the process and landing his team one victory short of the World Series.

The man who hired him, Cashman, decided he wanted those young stars to be nurtured and further developed by someone else. I'd spent a lot of time around the Yankees from 1995 through 2015, and after reconnecting with them during the ALCS, it became clear that some in the organization still weren't thrilled with the relationship -- or lack thereof -- between the manager's office and the clubhouse. The thumbs-down Yankees sure looked loose and fun during October, but the notion that the players won the Cleveland series for Girardi after his review-system blunder in Game 2 wasn't one management felt was based in fact.

As it turned out, Girardi needed to win the World Series to save his job and prove he could reach his players the way his bosses wanted them reached. These are pinstriped millennials, after all. Cashman praised Girardi's "tireless work ethic" after firing him Thursday, and Girardi responded in his own statement by thanking people up and down the organization, by thanking the fans and, yes, by thanking the news media, too. He's a good man, Joe Girardi. He won the World Series in 2009, and on the delirious ride back to suburbia, he stopped on a highway to help at an accident scene and stayed with a woman until the police arrived.

That intensity wore people out in the Bronx, and that's OK. Girardi did a pretty damn good job. Good luck to the guy who can replace Bill Belichick the way Girardi replaced Torre.

He's not worried about his baseball legacy, anyway. Girardi cared only to honor his dying mother and father by working his ass off. By those terms, he just earned another ticker-tape parade.
Report a correction or typo
Related topics:
sportsespnmlbjoe torreyankeesnew york yankeesjoe girardimanaging
Copyright © 2021 ESPN Internet Ventures. All rights reserved.
More Videos
From CNN Newsource affiliates
TOP STORIES