Brian Boyle's tearful return was triumphant, plus why the Blackhawks are a bit of a mess 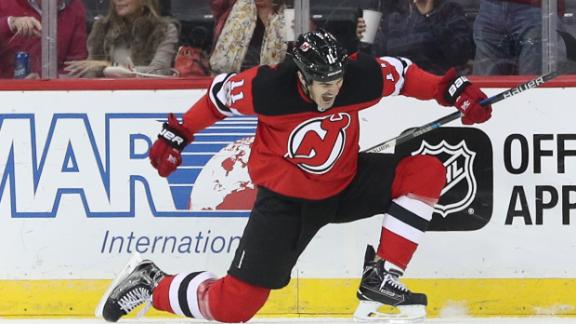 Hello, and welcome to the Weekly Reader, which will run every Friday and collect news and views from around the hockey world on the week's biggest stories. Seen something worth highlighting here? Hit me at greg.wyshynski@espn.com, or do the same if you have suggestions for the column going forward. Enjoy!

The goal -- and the reaction -- was the essential Brian Boyle.

Playing against the Edmonton Oilers at home on Thursday night, the veteran forward crashed the crease and took advantage of a fumbled puck by goalieCam Talbot, puttingthe rebound in the net to give the New Jersey Devils an early lead. It was the type of blue-collar goal that -- along with winning faceoffs and growingfacial hair that would make Inigo Montoya envious-- has defined Boyle's 11-year career.

Except this time, Boyle openly wept after scoring.

"I've never cried after a goal before. Usually, I can keep it in check," Boyle said. "These guys -- my wife, my kids, my parents, my siblings -- they've been through a lot."

His comportment was overcome by catharsis. It was the first goal of the season for Boyle, who returned on Nov. 1 after being diagnosed in the preseason with chronic myeloid leukemia (CML), a rare but treatable form of cancer that affects the bone marrow. Hopes were high that he could play this season -- wingerJason Blake got the same diagnosis in 2007 and then played a full season with the Toronto Maple Leafs-- but the toll on Boyle hasn't only been physical.

Boyle, 32,is a husband and a father of two children under age 3. He is also one of 13 siblings from a large Irish-Catholic family that hails from the Boston suburbs. He's had many long nights with his loved ones since his diagnosis. It's been taxing. Hence, when he scored, he felt an uncontainable rush of emotions.

"A lot of things went through my head in such a short amount of time. I was thinking about my family. How huge they've been, letting me continue to play and ... the stuff that's going on behind the scenes," he said. "I can usually separate it. But it was a wave of a number of different things. My wife's been through the wringer here. She's had a lot more to deal with than I'd say I have. I'm not here tonight if it's not for her and my family."

But he was there, doing what he has done throughout his NHL career: whatever is necessary to help his team win, energizing the entire building with that effort. Boyle gives his all to his teammates, and in this instance, he's honored that the Devils -- with whom he signed a two-year, $5.5 million deal over the summer -- have given him back so much.

"It was emotional, but these guys have been here through the whole thing with me. They've answered all the questions about it. They've [borne] some of the brunt of it as well. They've had my back," he said. "They've welcomed me here. I'm a new guy, and it's been an unfortunate circumstance, but they've supported me."

In that moment against the Oilers, through the elation and the tears, Brian Boyle found what he'd wanted to feel for two months: an emotional release and a sense of normalcy.

"I'm able to play hockey," Boyle told ESPN.com. "Things are good, and they're getting better."

These were the lines for Team USA in the Deutschland Cup opener against Slovakia on Friday:

Hey, Russia: We know you may or may not send your KHL players to the Olympics. But if they go ... WHATCHU GONNA DO WHEN TEAM USA UNLEASHES THE AWESOME POWER OF RYAN MALONE, JIM SLATER AND DAN SEXTON ON YOU?!

It has not exactly been the happiest of times for the Chicago Blackhawks.

The Hawks are 7-7-2, having lost two straight. That record is a tribute to the stellar start by goaltenderCorey Crawford (.942 save percentage). Otherwise, Chicago has been a bit of a mess -- including a 2.75 goals-per-game mark, which is 20th in the NHL and drops even farther if you eliminate the 10-goal burst against thePittsburgh Penguinson opening night.

Brandon Saad has one point in 10 games. Jonathan Toews has a goal and an assist in his past seven. Patrick Kane has two assists in his past six games.

As John Dietz notes in his autopsy of the Blackhawks' offense, there are problems throughout this lineupbut few solutions. Heck, the Blackhawks even reunited Patrick Sharp, Toews and Kane on a line that a few years ago would have been among the best in hockey. That reunion lasted an entire period against the Flyers on Thursday night.

Things are bad enough internally, and externally, fans bemoaned the organization for apparently getting yet another outdoor game. The Chief reported that the long-gestating Winter Classic game at Notre Dame in 2019 will feature the Blackhawks and the Boston Bruins. It would be Chicago's sixth NHL outdoor game.

Mary Clarke says enough is enough with these Blackhawks: "Yes, outdoor hockey in one of the most historic sports venues in the world. And the NHL doesn't need the Blackhawks to do it."

Satchel Price of Second City Hockey drinks those tears: "Let's embrace the Blackhawks Outdoor Barnstorm Tour and have them play outdoors in a different part of the country every year. It's fun, and it irritates just about everyone who isn't a Blackhawks fan. Let us cherish these special moments."

The Anaheim Ducks are blessed with Ryan Kesler and Kevin Bieksa. OK, maybe not contractually, but from a comedy perspective these former Vancouver Canucks remain the gold standard for cringe weirdness. Please recall the Kesler-Bomb stunts and the time that Bieksa conducted an entire interview as Kesler to an oblivious reporter.

The tradition continued this week as Bieksa followed up a stunt in which he pretended to be an intrusive "shovel boy" during a Ducks game with this instant classic, where he disguises himself as a security guard at The Pond. Hilarity ensues:

Bieksa on his back, like he's changing motor oil, using a metal detector wand onRyan Getzlaf's crotch is what this game is all about, folks.

Jersey Foul of the week

The only question I have is whether this guy still occasionally wears his Vincent Lecavalier Canadiens jersey from a decade ago, which was also born of incredible hubris and wishful thinking.

MSG Network miked upNew York Islanderswinger Casey Cizikasfor a game against the Oilers, and the result was pretty much everything you could ask for: funny and insightful, with a memorable highlight that involved his negotiation with referee Gord Dwyer about a spearing penalty that wasn't called on Zack KassianasKassian tried to get the puck out from under Scott Mayfield.

Dwyer: "Yeah, but he's trying to dig the puck out, and your guy is laying on it."

And then they both laugh heartily.

Great stuff. Well, except for the idea that the Islanders would be better off at 4-on-4 against Leon Draisaitl and Connor McDavid, who would go on to beat them in the 3-on-3 overtime.

A youth hockey assistant coach in Littleton, Colorado, was fired for a profane pep talk that encouraged the bantam players to work their opponents "like [expletive puppets]," which is as uncomfortably creepy as it sounds. Not to be all "think of the children," but this is just unconscionable. [CBS 4 Denver]

Players on the Plattsburgh State women's hockey team were disciplined by the school after it viewed a Snapchat video that showed "three members of the team drinking alcohol on the team bus as the team traveled to dinner after the championship game." [NBC 5]

A scorching rant about the Florida Panthers: "I can't honestly be encouraged to invest time and money into this product right now. And until they make some adjustments and prove to me that they are serious about winning, I won't. Maybe you shouldn't either." [Panther Parkway]

Behind the truly bizarre photoshoot featuring Bill Smith in full uniform, including goalie pads, near a pond from 1983. [The Score]

Frank Provenzano with a really insightful look at when it's the correct time to fire a coach midseason. Sample prose: "The thermometer in an NHL head coach's office is directly related to expectations (both real and perceived) among the team's fan base and, most importantly, in the owner's suite." [The Athletic]

An interesting look at the impact of short-term on-ice success on the hockey card market. [Raw Charge]

Why Harrison Browne opted not to retire. [Maclean's]

How five Canadian filmmakers discovered the nuances of hockey culture in ... North Korea? An interesting tale from The New York Times.

In case you missed this from your friends at ESPN

Emily Kaplan's humorous look at a fantasy football league among Blackhawks prospects, specifically young Europeans who have no idea what they're doing. "Football, it is a big thing here," said Ville Pokka, a Blackhawks defensive prospect who grew up in Finland. "Everyone in America is talking about football, always. So it is good for me to see why."