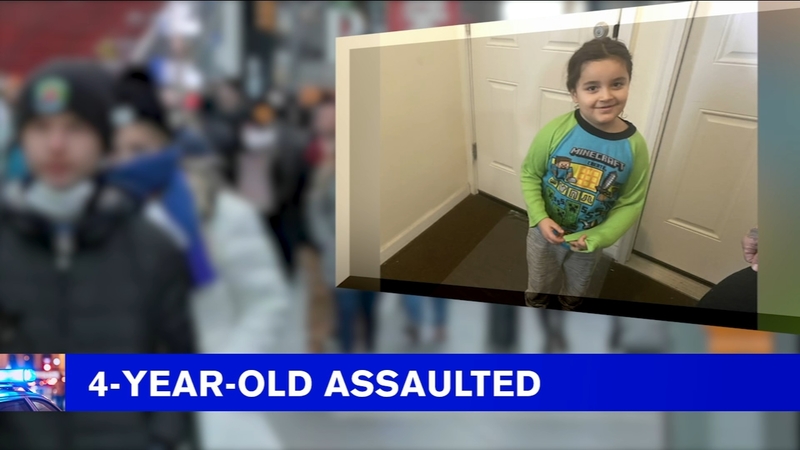 TIMES SQUARE, Manhattan (WABC) -- A man messed with the wrong family who was enjoying an afternoon stroll in Times Square. The moment this mother found out her son was punched in the head, she went after the guy.

Rafaela Rivera showed us the bruises on her arms after taking down the man who she says randomly punched her son angel.

"I was ticked off. I was outraged," she said.

She was with the 4-year-old and her daughter, Carmen, on Thursday afternoon in Times Square.

"He just got done doing a photoshoot for a modelling agency," she explained.

When the trio decided to enjoy a beautiful day in the city, that's when on 7th and 46th, Carmen noticed the odd man.

"He was moving weird, like really close to people," Carmen said.

The moment that guy got close.

"I heard a smack like somebody got hit in the head with a bottle," Rafaela said.

“I was ticked off, I was outraged,” says Rafaela Rivera after her son Angel, 4, was randomly punched in the head in Times Square. This was the wrong mama to mess with…she went after her son’s attacker. The story on @ABC7NY #nyc #wabc #ch7 #TimesSquare pic.twitter.com/oZG53jqT8P

That smack was her son, Angel, getting hit in the head.

"I was looking at him and I fell down on my head," Angel said.

"I turn around and the baby is screaming hollering and crying," Rafaela said.

She was the wrong mama to mess with.

"I grabbed him harder and we both went down. He was on top of me and I was not letting go," she said.

"I went to help my mom because there was a guy on top of my mom," Carmen said.

"My daughter says when he was down, she was trying to kick him because he was kicking and he spit at her," Rafaela said.

With the help of two other good Samaritans, that man was arrested.

Police have identified the suspect as Babacar Mbaye. He's now charged with assault and endangering the welfare of a child.