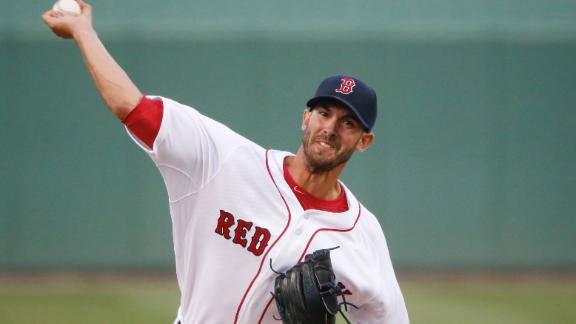 PHILADELPHIA -- The Boston Red Sox announced Monday night that they had signed right-handed pitcher Rick Porcello, who was eligible for free agency after the season, to a four-year contract extension. The deal will make him the highest-paid pitcher in club history by average annual value.

Porcello -- who had been coy Monday morning in answering questions about whether he would pursue negotiations after the season started, saying his focus would be on the season -- wrote about the extension on The Players' Tribune, then discussed the deal on a conference call with Red Sox general manager Ben Cherington.


"I knew the opportunity to enter free agency," Porcello said. "When I first got to camp, I saw the way, from ownership to Ben to the coaching staff to the players there, the way everything is run top to bottom, the devotion to winning the World Series, that was something I wanted to be a part of. It wasn't a very difficult decision for me at that point to stay here.''


Porcello grew up in New Jersey, and his family owns a house in southern Vermont. He also mentioned on the website that his younger brother recently was accepted at the Boston Architectural College, another reason staying had its appeal.


The offer trumps by $12.5 million the four-year, $70 million deal the Red Sox offered Jon Lester, who like Porcello was entering his free-agent year, prior to last season. The Sox eventually increased that offer to a six-year, $135 million package, well short of the six-year, $155 million deal Lester signed with theChicago Cubs, with the team holding a $25 million option for a seventh year.


Porcello, who came to the Sox last Dec. 11 from the Detroit Tigers in a trade for outfielder Yoenis Cespedes, becomes the third player on the Red Sox roster who eventually will command a salary of $20 million or more, joining free-agent signees Hanley Ramirez and Pablo Sandoval. Ramirez signed a four-year, $88 million deal, Sandoval a five-year, $95 million deal.


Porcello is scheduled to start the team's second game of the season Wednesday night against thePhiladelphia Philliesin Citizens Bank Park. He was 15-13 with a career-best 3.43 ERA in 2014, his last season with the Tigers and his first in which he pitched at least 200 innings (204). He is 76-63 with a 4.30 ERA in his lifetime.


In a spring in which a regular theme is that the Red Sox are lacking an ace, they will be paying Porcello like one. Cherington was asked whether he regards Porcello as an "elite" pitcher and about the importance the team places on the so-called prime years of a player's career, to the point where the Sox are willing to pay a premium in exchange for fewer years in a deal.


"We think Rick is a really good pitcher, and we think he's a very talented pitcher who is driven to succeed and driven to be as good as he possibly can be," Cherington said. "As I mentioned before, any negotiation has all sorts of variables. Performance is one of them. Talent is one of them. Age. A team's needs. All are variables to consider.''


Porcello becomes the second pitcher the Sox acquired since Lester's departure who has signed a multiyear deal since coming to Boston. In January, the Sox signed left-hander Wade Miley, acquired in a trade with Arizona, to a three-year, $19.25 million deal with a club option for 2018, the first year Miley is eligible for free agency.